Today’s story is sad, shocking, not at all funny, and sadly still ongoing. Be warned!

Most of you have heard of Mormons and even perhaps of one of their churches, the Church of Jesus Christ of Latter-Day Saints. What you probably don’t know, is that in 1890, this church renounced polygamy from its practices. Needless to say, this didn’t go down very well with some of the men there, and in 1935, a division was made, the Fundamentalist Church of Jesus Christ of Latter-Day Saints (FLDS for short). They moved to Colorado City, Arizona, where they built their community.

Let’s skip slightly forward to 1955, when Warren Jeffs was born. He was the son of Rulon Jeffs, leader of the community and self-proclaimed direct prophet of God. Warren was chosen by his father, as the next prophet in line, although his father had somewhere between 60 to 85 children from roughly 20 wives. I guess that given the household circumstances, Warren felt like a really special snowflake, and started abusing power from a young age.

Warren became head of the community’s school at the age of 17. It was around this time that he started molesting the children. He would walk into a classroom, pick one, and bring it back to his office.

After his father died, he became the prophet and then he realized that he had full power over everyone in the community. See, he was “appointed by God”, and the people living there were denied access to any kind of media from the outside world. Warren started marrying, and he managed to marry roughly 70 women, most of them underage, with the youngest one being 12 years old. He also re-married his father’s widows, all 20 of them (and there was no report of him excluding his biological mother).

That’s when, in order to marry more, he started banishing some male members, and claiming their wives. In 2004, he banished 20 male members and gave the women to different men of his choosing. That’s when finally, all these expelled men decided to contact the authorities and report all incidents. An arrest warrant was issued, but Warren managed to get away and spent a year in hiding. He was finally arrested, after making the FBI’s 10 Most Wanted List, and has been sentenced to life plus 20 years.

Now, here’s the problem (or one of them). He continues to run the cult from inside the prison. Although he can no longer molest minors, he has given this order to his high-ranking men. All marriages are annulled, and now he gets to choose who sleeps with whom, just for procreation.

As you read these lines, thousands of people, and especially children, are being abused by people like Warren. It’s one of those things that calls for immediate action from all of us, victims or not. Speak up and stand your ground! 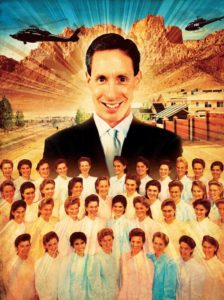