Do you think that bullying, in the form it takes on social media, is a phenomena of our times? Do you think that public humiliation, and its grave consequences didn’t exist in the old days? If you answered yes, then I’m sorry to tell you that you are wrong. Here’s a story from roughly 540 BC.

Hipponax was born in Ephesus, and he was a poet. Well, let’s just say that he wasn’t the regular kind of poet, if such thing exists. If we want to put this in modern terms, imagine Hipponax as trying to run the biggest and oldest rap-battle of his time. He was basically free-styling, although he was using the basic iambic method, and his aim was to be as insulting as possible. For someone with a creative mind, the Greek language can be their best ally, as it offers the chance to make new words from scratch. For example, he managed to enrich the Greek vocabulary with words like μεσσηγυδορποχέστης (mid-meal-pooper).

His satire soon became annoying for many. No one could escape his mouth, be it God, King, or simple man. He was exiled from Ephesus, and moved to Clazomenae.

Another important fact that I forgot to mention, is that Hipponax was ugly, as in almost-deformed ugly. Keep that info, it will become handy in a while.

So, back in Clazomenae, where he came in contact with two famous sculptors, the brothers Bupalus and Athenis. According to the gossip, the feud started when Hipponax fell in love with the daughter of Bupalus and got rejected. The historical facts, though, show that the brothers, started making horrible fun of the poet’s ugliness, by making horrific sculptures of him that were publicly shown and ridiculed by the crowds.

Hipponax wasn’t your timid, romantic soul, and he started fighting back with the best weapon he had, his language. He unleashed a full assault with poems where he accused Bupalus especially (maybe the gossip was right) of having an incestuous relationship with his mother, Arete, literally calling him a mother-f****. In another one he depicts himself as having oral sex with Arete, and then we have this rapping gem:
“Take my cloak, I’ll hit Bupalus in the eye! For I have two right hands and I don’t miss with my punches.”

Well, care to know what happened next? Bupalus killed himself, as the backlash was too much to handle.

Is there a moral to this story? Yes! Be kind, people, always!
(and be careful when you pick a fight) 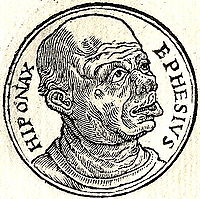