These days mark the anniversary of the biggest naval disaster of the last century, and yes, I’m talking about the sinking of the Titanic. Well, I don’t know if it was the biggest, and considering that two World Wars followed it, chances are it wasn’t. Still, it was a disaster that had an enormous social impact. It was only logical, that something of this magnitude, would inspire legends, legacies, and of course conspiracy theories.

There are so many interesting stories out there that it is hard to focus on only one. One I really loved was the story of the psychic William Thomas Stead, who predicted the sinking of a huge vessel, that would hit an iceberg, yet he boarded the Titanic and sank with it. I guess prophesying the name of said vessel was beyond his psychic abilities, unless the conspiracy theory I will analyze for you, is indeed true…

See, the Titanic had two sisters, the Britannic, which is at the bottom of the Aegean, and the Olympic. The Olympic was very similar to the Titanic. They shared very small differences, like the number of portholes in one deck, the spacing of the windows on another deck, and the floors, which were initially the same, but shortly before the first sail, the floors of the Titanic were carpeted.

The Olympic was slightly older than her sister, and she suffered two collisions in 1911. Both of them created considerable damage to the vessel, a list to port (which is marine talk for tilt) and moreover, she was to blame for the one of them, so the repairs couldn’t be covered by the insurance. The Titanic was still not finished, which meant that the Olympic couldn’t be repaired on time, plus the cost was enormous.

Here’s where Robin Gardiner developed his conspiracy theory. According to him, the White Star company decided to patch up the Olympic, present it as the Titanic, sink it, and get the insurance money. Later, they would present the Titanic, as the fully repaired Olympic. Now, that sounds chilling, doesn’t it?

Gardiner claims that many survivors complained about the tilt, but it hasn’t been verified. He also claims that apart from a few men, the crew was part of the plan, and that of course, the Titanic never really hit an iceberg, but a rescue ship that was sailing nearby, on purpose, with its lights off.

The details pointed out by Gardiner go on and on, as with any good conspiracy theory. It is unclear if the truth will ever be revealed, or if this is even the truth to begin with. One thing is important, corporate decision or not, almost 1500 innocent people perished that night.

Another thing that must be said, and the writer is adamant about it, there was room for Jack on that freaking door… 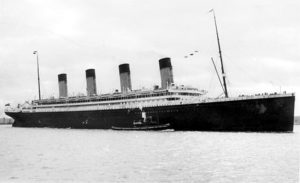