Once upon a time in Vienna, around 1889, there was a poor Jewish boy who claimed he had psychic super powers. His name was Hermann Steinschneider. He was able to convince his parents of his abilities, and he also managed to convince many others, including some very powerful people… No spoilers! Keep on reading.

So, after feeling that his abilities needed a larger audience than his parents, Hermann ran away from home and joined a circus. There he was able to learn more and add more skill to his performances, excuse me, I meant “readings”.

The circus seemed again too small and he decided to expand his followers by joining the Austrian army. There he managed to enchant the soldiers, by performing readings which would reveal details about their personal lives, with amazing details. Of course he failed to inform them that he was using steam to open their mail prior to the reading.

Of course his success didn’t go unnoticed and he soon started having problems with the law. He was arrested for fraud, he was accused of hypnotizing women and then assaulting them, and so on. Still, he would escape every single time, and not only that, he would go higher and higher in the social circles of his time.

Sometime in the late 1920’s, Hermann found himself living in Berlin, in a huge apartment which he had named “The Palace of the Occult”. All the high society of Berlin would pay its respects, and the Palace was constantly buzzing with people. See, here’s where the real problems begun, because at that time and in that city, the high society consisted mostly of occult-thirsty Nazis…

Apparently his predictions were so great, his prophesies so pleasing, that he soon ended up couching Adolf Hitler himself. He taught him how to address huge crowds, mass psychology, and the secrets of dramatic effects.

It is said that he had foreseen the Reichstag fire, which helped Hitler become chancellor. It is also said that he just had inside information about it. In any case, he paid for that with his life. It is not clear whether he was assassinated because he knew too much, because other high-ranking Nazi officials disliked his relationship with Hitler, or because it was revealed that he was a Jew. He was found dead on March 1933, a few days after said fire, and that, he had surely not foreseen. 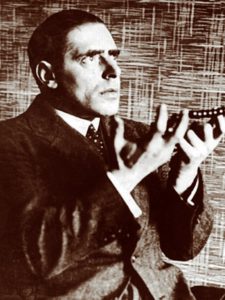