The inspiration for my next article may come completely unexpectedly, e. g through a nice discussion on an irrelevant topic. It was a lovely chat, on epic battle scenes in films, that made me remember this story. Well, it’s not that irrelevant; you’ll be able to follow my train of thought. So, let’s leave the gore behind this week, and dive (pun intended) once again into Greek folklore.

This story is connected to one of the most prominent Greek historical figures, Alexander the Great. There won’t be any descriptions of battles, though; my writing skill is not quite there yet. This is a story about his sister, the beautiful Thessaloniki, and it reads just like a nice medieval fairy tale. The story firstly circulated in the 3rd century AD by a writer named Pseudokallisthenis (no need to remember that, no worries!). It became a huge success, and was in fact translated into many European languages. Of course the writer didn’t make the story up; it was a collection of existing myths surrounding Alexander.

Thessaloniki was Alexander’s sister, but from a different mother. According to the lore, she had joined Alexander’s march through Asia. Alexander was a very ambitious man, and a fan boy of Achilles. He had everything his hero had, the looks, the skills, the rage, the fame, but lacked the most crucial thing; immortality! Now, where can you find immortality? But in the Fountain of Youth of course, which was also conveniently located in central Asia. After consulting with some wise men, Alexander took a detour from killing to locate it.

There were tasks to be faced, and dragons to be killed (ok, it was just one), but Alexander, who knew no match, managed to ride through the tough desert with his loyal horse, Bucephalus, cross the “beating mountains” (yeah, it was a thing), slay the dragon, and fill one glass bottle with the miraculous water. Why he didn’t drink it on the spot, is a question I have ever since I was a child, and will never be answered.

Back in the palace, and some days after Alexander’s return, Thessaloniki was watering the plants. Yes, you guessed correctly, she used the immortal water to water wild onions! Wild onions, ladies and gentlemen… and by the way, this is why wild onion plants never wither, or so they say. When Alexander realized what had happened, all hell broke loose. He explained to her what she had done, and here is where the story takes two different turns. It’s not clear if Alexander cursed her, or she was completely devastated. Either way, the result was the same. Thessaloniki turned into a mermaid, and an immortal one, because Greeks appreciate fine irony. 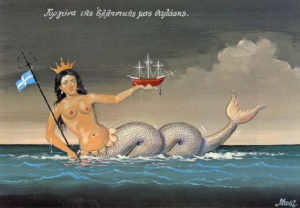 From then on, and through the ages, Thessaloniki lives mostly in the Aegean. It is said that she appears at ships and asks the sailors if Alexander is still alive. If the crew replies no, she turns into this evil, vengeful creature, creates a storm, and sinks the ship. The one reply that can lead to safe harbors, is “He is alive, and reigns, and conquers the world”. It’s only then that Thessaloniki lets the ship go without any trouble.

If you have ever visited Greece, you have probably noticed that mermaids are a huge part of Greek folklore. It’s no wonder really, considering that a huge part of Greek culture is in fact nautical. Thessaloniki was real, she was born a few years after Alexander, and of course she never joined him. The 2nd biggest city of Greece, is named after her, by her husband, Kassandros. She was murdered over a hereditary dispute.

For the love of God, if you ever bump into our edgy mermaid, do not, I repeat, do not let her watch Oliver Stone’s “Alexander”. No one has survived to tell this tale! 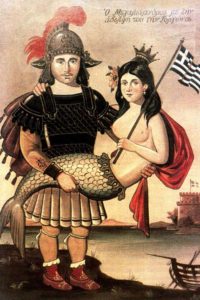 Photos: Both pictures are folklore illustrations, made by one of Greece’s most talented artists, Bost.