One of the challenges I had to face when I started “Hiccups” was the debunking of many of my beliefs. See, when I have an idea about an article, I start researching, and this search might last a whole week or more. Through this process I often come across validated information that challenges, or even worse, shatters things I considered facts. I’m actually happy for this. The more order I can bring to this chaos of uncontrolled information, the better! This is one of those stories.

The inspiration for this story came after watching an old “Supernatural” episode – it’s my guilty pleasure, don’t judge! Somewhere in season 5, they deal with the supposedly cursed car of James Dean, “Little Bastard”. Raising my eyebrow, I said to myself, “yeah, I know about this curse, let the search for my new article begin”. Here’s when things turned. *sound of rewinding videotape *
James Dean, a young and very promising actor, died at the age of 24 in a horrible car accident. He was driving a Porsche 550 Spyder, named “Little Bastard”. The accident was the result of speeding and luckily didn’t claim any other lives. The car was completely destroyed. According to the legend, the wreck was bought by a collector and maker of custom cars, the famous George Barris. Instead of having it rebuilt, Barris started selling its mechanical parts.

Here’s where the list of weird incidents and fatal accidents begins. There’s the story of a mechanic working on the wreck who lost his leg when Little Bastard fell on it, numerous people dying while racing with cars that included Little Bastard’s parts, exploding tires, thieves who got injured while trying to strip off pieces of the car, garages that held car exhibitions which included the shell of the car would burn to the ground, and so on, and so on… There’s also the case of Troy McHenry, who died while racing in a car with parts of Little Bastard. Why am I separating McHenry from the rest? Because his death is the only verified one.

Now, this is the story as we know it from Barris. The reality is somewhat different.

The car was firstly bought by Dr. William F. Eschrich, a passionate driver who had in fact competed against James Dean in various races in the past. His family is still the owner of the registered engine of the Porsche. After Eschrich took the parts he needed, he gave the remains of Little Bastard to Barris. Barris did with them, what any good salesman does. He created the myth in order to gain money. Pretty easy, common, and somewhat scary. Every time the interest in the legend of James Dean would drop, Barris would conveniently circulate yet another incident that “proved” the curse was real.

So, what do we have here? Someone exploiting an untimely death by spreading rumors on more death, and a bunch of people (myself included) longing to be spooked. I don’t know who the “Little Bastard” really is in this case. 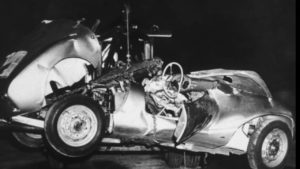