I never thought that writing the myth behind Capricorn, would turn out to be such a challenge. There are many explanations around, some of them go so back as to involve Cronus (or Chronos), the father of Zeus. Again, I see no other way, than to start with the rumors and work towards a logical conclusion, well as “logical” as a conclusion about mythology and astrology can be!

So, what do we have here? A goat, but not your ordinary goat. This one has a fish tail! It has even been recorded by the Babylonians as a “Goat-Fish”. Hold on to this particular tail, we are going on a deep dive.

If you are not willing to search deeper, the first explanation you will find will be about the great God Pan. You will probably come across a story, where Pan in order to escape Typhon, gave himself a fish tail and jumped into a river. Given the great importance of Pan in ancient Greece, I highly doubt they would use this particular story, and an indifferent name, to immortalize him. To give you an idea, Pan in Greek (modern Greek too) means “everything”. I don’t know if everything was named after Pan, or Pan after everything, the point is loud and clear.

The second story you might come across, is that of Amalthea. She was the goat that nursed the infant Zeus, in a cave somewhere in Crete. His mother Rhea, had hid him there, in order to protect him from his father, Cronus, who very much liked to, literally, eat him. You all know Amalthea, as one of her broken horns was turned into what is known as Cornucopia, the horn of plenty. Still, no fish tails here, let’s move on.

As you know, the ancient Greeks had a very vivid imagination. We had all kinds of creatures and hybrids, and among mermaids with snake hair, multi-headed gigantic serpents, fire-breathing Chimeras, and Centaurs, there was of course room for fish-tailed goats! The name was Aegipan, but the origin is kinda clouded in mystery. Some say it was only one, son of Zeus and Aega (which means “goat” in Greek), some say it was the father of Pan himself, and some claim there were many, and slowly evolved to the goats that we know.

One story stands out, though. The one of an Aegipan, or the Aegipan, who came to the aid of Zeus, during the Titanomachy -or Titan War if you please-. That must have been a sight for sore eyes. The mighty Titans, old, revered, and powerful Gods, against their own, young, and energetic offspring! It was during one of those brutal, bloody battles, that Zeus’s sinews got stolen by a Titan. Aegipan and Hermes were able to recover and restore them. For this epic task, Zeus granted Aegipan with immortality.

That was it! Another story of weird creatures, bloody battles, cannibalism, and a hint of bestiality, all courtesy of ancient Greek mythology. Aquarius is coming up,  and things will get awkward… 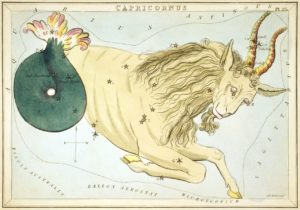