You know what day it is today… day of flowers, chocolate, cards, and declarations of love. Well, this site likes to look at things a bit differently. Today I will talk to you about a couple, whose relationship led to what is known as “The St. Valentine’s Day Massacre”. Grab that leftover candy and follow me.

Our “couple” is George “Bugs” Moran and Al Capone. Those two were roaming the streets of Chicago, back in the 1920’s, engaging in all sorts of shady businesses. It was pretty clear that there was room for only one of them in the city. That’s about when George had a bad, bad idea.

He attempted to assassinate someone named Jack “Machine Gun” McGurn, and judging by his nickname, Jack wasn’t selling flowers for a living. He was also close to George’s “buddy”, Al. Now Al, being a good friend and all, wouldn’t leave this opportunity go unnoticed. He would do the right thing, and show George, who is really running Chicago.

There’s apparently some dispute over the fine details of this plan, because those who survived, kept their word, as true mobsters, but here is what we know for certain.

February 14th, 1929, some men dressed as police officers and driving a police car, approached the warehouse of George in Chicago. According to some witnesses, only two were uniformed- the rest were in civilian clothes. The mobsters thought it was a routine check and followed the men’s orders. The minute they turned their backs and faced the wall, they were mowed down in a barrage of bullets.

Seven men were killed that day, only the dog survived. One of the mobsters, Frank Gusenberg, who died a couple of hours later, was questioned for the crime. His official response was “I was shot by no one”.

In a weird twist of fate, George escaped the attack. He saw the police car outside the warehouse, and turned away, trying to avoid the police, unaware of what was going on inside. He wasn’t able to sustain his gang after this, as most of his top men were killed that day.

Even the warehouse was demolished, but not before a collector managed to buy the piece of the wall with the bullet holes. The wall can now be seen at the Mob Museum in Las Vegas.

As for Al, well, he really is a part of history. Needless to say, he was never charged for this, as everything was wonderfully orchestrated. The case is still considered unsolved.
Although this act wasn’t really on Al’s romantic side, he was known to send expensive flowers to the funerals of rival gang members…that must count for something, no? 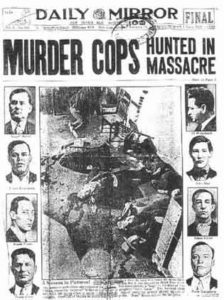