Throughout history, there have always been educated leaders who tried to push the limits of knowledge a bit further, mostly by experimenting. Their ways have sometimes been questionable though, and so have the results, and don’t get me started on some of their intentions.

The question here is, what could be the first, original language of mankind? For those who believe in the Bible, which language was spoken before Babel? If you deprive a baby of all sounds, which language will it speak?

Many leaders and scholars experimented with this idea, and to put it mildly, the methods used are considered child abuse in our modern society. Herodotus mentions the first ever experiment of the kind, which took place in ancient Egypt, and many more followed, but today I want to focus on one ordered by King James IV of Scotland.

King James was a highly educated man for his time, and I can only assume his interest was nothing more than scientific curiosity. See, he was a polyglot- he spoke 7 languages to be precise-, he was a genuine lover of arts and sciences, and his court was open to all those with interesting ideas. He was even the patron of an inventor who was trying to fly with chicken feathers, and who is maybe worth a full article here.

Anyway, there should be no doubts that King James honestly tried to solve this riddle.
Inchkeith is a small uninhabited island in Scotland. It has been used as a quarantine for syphilis and plague victims, and in 1493, King James sent two infants with a mute caretaker there . Yeah, the point was for the kids to grow up isolated, without hearing any human sounds and naturally speak the language of Adam and Eve…

There’s no record of the children catching a glimpse of the chicken-feather-winged scientist! 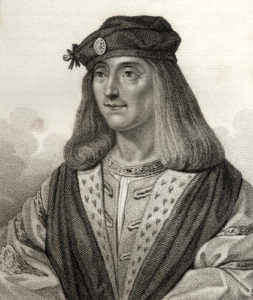