I wonder how many of you used to write letters to Santa Claus. You know, those awkward letters, with the cute handwriting, and the even cuter spelling mistakes? The ones where you tried to convince Santa – as if he didn’t know – that you were good kids and so much deserving of that gift. You would then put it in an envelope, write “Santa Claus, North Pole” and put it in the mailbox, and with it, all your hopes and wishes for Christmas. Ever wondered what happened to those letters? You do realize you are in Hiccups, and this will have a slight twist.

We are in New York, and the year is 1913. Throughout the states, and for decades upon decades, all those letters were answered by charitable organizations, but New York was a different story. Due to a series of bureaucratic problems that occurred in 1911, the city had no way of dealing with all those thousands of letters. They would eventually end up in the “Dead Letter Office”, aka “the office where undeliverable letters go to die”, aka “an office, I would love to visit if I ever find my way to New York”.

December of 1913 was no different. The letters would go straight to their resting place, and the city’s postmaster, Edward Morgan, had no way to deal with this. This is when our hero came along. His name was John Duval Gluck, Jr and he was a broker. Much to Edward’s relief, John had a perfect plan about those letters. He founded the Santa Claus Association which would be responsible for answering the children’s wishes. The idea was plain and functional. The citizens of the city could take one or more letters, and fulfill the child’s wish.

The plan worked as a charm! The generous people of New York responded immediately, gifts were sent out, the children were happy, and John managed to gather a small army of elves, who like Santa’s elves, were happy to work for free for the common good. According to the statistics, around 28.000 children were helped in the first year alone. Not bad at all…

Remember what we said about John being a broker? As the years were passing by, and the Association was becoming more and more of an institution, John felt like expanding. He started opening branches in other cities, used celebrity actors for advertising, and even suggested they should build their own building. The question was, how generous were the generous people of New York? John started asking for funds. At first it was money for the stamps, then for the gifts, then for the building and so on. I don’t think he asked for funds for the elves, though… anyway, money started pouring in. It was a noble cause after all.

Bird Coler, a commissioner of public welfare of the city of New York, wasn’t so convinced of the nobility of the cause. I mean, you kinda expect that from a guy named “Bird”, right? He started digging into the Association’s finances, asking to check the books. After some suspicious resistance, he got the chance and realized that there were tens of thousands of dollars that were unaccounted for. John had done an excellent accounting job though, and Bird wasn’t able to charge him with fraud. The post office took over again, and John had to move to Florida.

To be honest, I don’t know how I feel about John. Fraud, con-man, scammer. On the other hand, his initiative was good, and paved the way for more charitable work. I bet the elves were furious though, and I’m positive that John made the naughty list that year… and the ones that followed most likely. 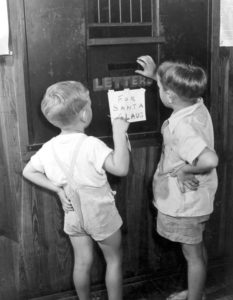