There was a time, back in the late 60’s- early 70’s when, after the tremendous success of “Rosemary’s Baby”, the horror genre would flourish. While independent filmmakers were creating low-budget, gore, cult masterpieces, Hollywood preferred to deal with more “serious” religious themes. “Rosemary’s Baby” was followed by “The Exorcist”, and “The Omen” came shortly after. What do all those three films have in common? Huge success, screaming and fainting audiences, Satan, and fatal curses attached to them.

The main idea in the minds of the people of the time, was that Satan was displeased with Hollywood revealing his tactics to the public, and he was actively trying to stop, or punish all involved. I, on the other hand, don’t see why he wouldn’t want that, but it’s hard to get into the mind of someone you don’t believe exists in the first place. Anyway, that’s a different topic; moving on.

So, all of these films have weird deaths, happenings, and creepy coincidences connected to them, and although “Rosemary’s Baby” is worth an article of its own (for entirely different reasons), the series of eerie events connected to “The Omen” stands out. I will go through them, one by one, as they unfolded. Needless to say there will be spoilers, but on the other hand, have you seriously not seen “The Omen”?

The first one, cannot be presented in a cute, “light” way, in my humble opinion. As soon as Gregory Peck signed to lead the film as Robert Thorn, his son killed himself. I can’t even begin to imagine the pain, and according to reports from the shooting of the film, Gregory Peck did struggle emotionally, especially while filming the scene where he has to kill his son.

While the cast and crew were flying to England to begin filming, two different aeroplanes, one carrying Gregory Peck, and the other the producer Mace Neufeld, were hit by lightning. The engine of the aeroplane carrying Peck caught fire and almost crashed. Later on, the film production rented a small aircraft to film an aerial shot of London. The airline company switched aeroplanes at the last minute, and apparently forgot to send a memo to Satan. The original aircraft crashed, killing all six passengers.

Oh, do you remember that creepy cemetery scene, where Peck is attacked by Rottweilers? Of course a stuntman was used, and he was wearing a heavily padded suit. The trainer was also present. All of the security measures didn’t protect the poor stuntman though, who was brutally attacked by the dogs during filming. They bit their way through the padding, almost killing him, and wouldn’t listen to the trainer’s orders. 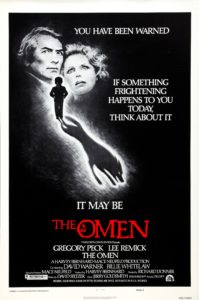 It seems like Satan employed animals more than once for his evil plans. I don’t know if you remember this scene, where little antichrist and his family go on a safari, and the car is attacked by baboons. The original scene was supposed to be with tigers, but while filming it, one of them attacked and killed Sidney Bamford, an animal expert who worked for the zoo.

Earlier I mentioned the producer, Mace Neufeld. I guess Satan was a bit fixated with him. Neufeld was staying at the Hilton, which was blown up by the IRA. The producer was not there at the time. Just some days later, Neufeld together with some other crew members, decided to visit a restaurant in London. While driving there, the restaurant blew up, again by the IRA. For argument’s sake, let me just say that the IRA was very active at the time. Also, at this point I would like to point out Satan’s timing issues.

Things seemed to be quiet after that, and the film was released successfully on June 6, 1976. Yes, of course it was marketed this way; it wasn’t a coincidence. Was Satan done with them though? Sadly no. He kept the most gruesome death for last.

One of the most famous crew members was John Richardson, a special effects specialist. Richardson was responsible for the one scene in “The Omen” that has haunted thousands of people. Yes, I’m talking about the decapitation of Jennings, played by David Warner. I dare say, it’s one of the most iconic death scenes in the history of films.

Some days after the release of “The Omen”, Richardson and his assistant, Liz Moore, were in the Netherlands, working on a different film. While driving on a country road late one night, they were involved in a head-on collision. Moore was literally cut in half by the wheel of the other car. According to Richardson, when he tried to understand what had happened, he saw a road sign saying “Ommen”. There have also been reports saying that the sign marked 66,6 kilometers, but road signs usually have round numbers. Others claim that the collision happened either 6,66 kilometers from Ommen (which is an actual town by the way), or at the 66,6 kilometer of – never mind, they never state that, and it doesn’t really matter. The accident is freaky and gruesome enough on its own.

See? I told you there was a lot going on with this film. Do I believe in curses? Not really. Maybe there are other film crews out there with similar eerie stories, which have never been known, or been characterized as a “curse” simply because no one was spooked beforehand. Or maybe I’m completely wrong… who knows?

Now go watch “The Omen”. The original, not the remake! 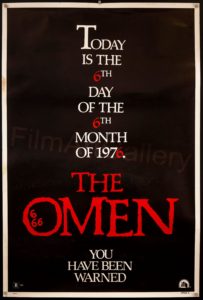