This time I will attempt to tackle a purely philosophical subject. It is inspired by some recent sad events in my personal life, and although I know it doesn’t really belong here, the need to write this (pun unintended) is really strong. Please bear with me, as I try to unfold a core philosophical concept of ancient Greece. Before I begin, let me just take a moment to thank my “silent helper” who wishes to remain anonymous.

The basic theological system of ancient Greece is known to most of you. Even if you are missing the details, the idea of almighty Zeus and his team of Gods and Goddesses is more or less familiar. What you might be missing, or didn’t ever think about, is that this intricate web of deities, which was created over a vast amount of time, was almost a living organism, always expanding by implementing deep philosophical concepts into its core. Of course, those concepts or ideas if you please, were godified/personified along the way adding to the pantheon. The key word here is “importance”. The higher the importance of a concept, the stronger the deity.

In this spirit, the Greeks came up with a Goddess who, with the exception of the Romans, is generally unknown outside Greece. She was higher than Zeus himself, and all the other deities for that matter. Her name was “Anagi”, or as you will find her in philosophical textbooks “Ananke” and her name translates to “Necessity”, or as I like to call her “Need”. Her Roman counterpart, for those who like to dig further, was “Necessitas”. She had two sisters, Via (Violence) and Adrasteia (Inevitable Force – also an alternative deity to Nemesis). The three of them gave birth to the three Goddesses of Fate.

So, what did the ancient Greeks think of Need? Well, mainly that she is an inevitable violent force. Our moving power behind every single action, every single decision, and every single move we make on this huge chessboard we call “our life”. Our Need is there, guiding our way, powering our motivation, and we are nothing but pawns, walking along the path laid out for us by her and her daughter, Fate. It gets worse when her sisters join the game. It’s then when we blindly, and violently, push our way through this path, following the inevitable desire to satisfy our Needs.

This is also the secret, I think. Accepting Need as a Goddess makes me wonder; how do we treat Gods? We respect them, bow to them, fear them, make sacrifices and offerings, pray, beg, anything to keep them satisfied. What happens when all fails? Need is a vengeful Goddess. She retaliates with this painful inner gap, this feeling of vast emptiness, where our fulfilled needs ought to be. Then come her sisters; the thirst, the unstoppable desire, the struggle, and finally the motivation.

“For dire Necessity which nought withstands, invests the world with adamantine bands. ” – translated by Thomas Taylor (1792)

“Because the mighty Necessity rules all” – translated by me (2018) 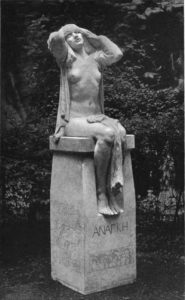 The Goddess as seen by sculptor Gilbert Bayes.