Although I knew what I was getting into when I started researching this, I wasn’t fully prepared for the amount of info out there. If I were a scholar, I could probably spend the rest of my career just researching this. If you are wondering why I’m going to attempt it, well, let’s just say that someone deserves a better answer than the one he initially got. Allow me to dissect Robin Hood!

First, a small disclaimer… It is my personal belief, that most legends have an actual starting point, that could vary from case to case. It can be an actual hero, whose achievements reached mythical proportions as they were spreading by word of mouth, or it could be a religious tradition/ritual that lost its meaning and transformed as it was delivered on from generation to generation. On many happy occasions, historians can trace back a legend to its origins, and reach a relatively safe conclusion. Robin Hood is not one of these cases…

I would bet that each one of you has seen at least one film about Robin Hood. Still, let me refresh your memory on the basics of the story; at least the basics of the most common version. The first known story comes to us from 1377. It was called “Piers Plowman”, and as it is common in medieval stories, many of the characters were added later.

So, dear Robin, a local aristocrat, joined Richard the Lionheart in the 3rd crusade, and when he returned, Richard’s brother John, was misruling the land, leading Robin in a fugitive’s life. In older versions, Robin became an outlaw after accidentally killing one of John’s deer. In any case, Robin found shelter in the woods, Sherwood Forest to be exact, where he formed a gang of other bandits, the Merry Men. This gang was slightly different, as they stole from the rich and gave the loot to the poor. Also, they were constantly harassing John’s men, and the local, evil Sheriff of Nottingham. In the meantime, Robin was in love with lady Marian, a very popular lady indeed, as the Sheriff was also in love with her. After numerous stand offs between Robin’s gang, and the authorities, Robin and his close friend, Little John, were finally arrested. Marian, in an attempt to save her beloved, offered herself to the Sheriff, in exchange for Robin’s freedom. Of course the Sheriff didn’t intend to keep his part of the deal, and according to each source, the marriage was interrupted either by the rest of Robin’s gang, or Richard the Lionheart himself. Needless to say, the return of the righteous King, restored Robin’s reputation, and they all lived happily ever after.

Let’s be honest, it’s an awesome story! A group of skilled, intelligent, and worthy men, with high moral standards, true warriors of justice, defy authority, state and church alike, not only by ridiculing it, but also by rooting for the less fortunate in society. Given its time, the idea itself was revolutionary. And to think, that they did all that, while wearing green tights! Did I mention the tights?

Seriously now, the tights… Can you think of anyone else being really skilled and wearing green tights? Peter Pan, perhaps? There are many scholars, who claim that the truth behind this legend lies somewhere in the folk traditions of the fairy realm. Robin is connected to the Green Man, a pagan deity symbolizing rebirth, or the hobgoblin Robin Goodfellow (who made a memorable appearance in Shakespeare’s “A Midsummer’s Night Dream” as Puck), or even the Teutonic elf “Hodekin”. More or less, Robin could have been a trickster. 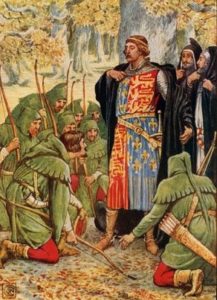 On the other hand, there are those who insist on pinpointing an actual historical figure, and this where things get really complicated, as the candidates are far too many. The truth of the matter is, that after a while, there are numerous bandits on various archives with the name Robin Hood, or variations of it. There are so many, that it is no longer clear, if the outlaws were choosing the name as an alias, or if the story of Robin is named after said alias.

From all the stories I read, and trust me, I’ve read a lot, there is one that gets a bit closer to the story as we know it, and that is the story of Roger Godberd.

I don’t know Godberd’s social status, but he did serve under an Earl, Simon de Montfort, in Leicester. During the battle of Evesham, in 1265, Godberd fought against King Henry III, and for that he was outlawed. Guess where he took shelter…Sherwood forest. He remained there in hiding for four years. He was arrested by the Sheriff of Nottingham at an abbey, and transferred to Nottingham Castle, where a knight managed to set him, and other fugitives free. Still, he wasn’t that lucky, and after he was finally captured, he spent three years in prison. While he was waiting for his trial, King Edward I returned from the 8th Crusade, and amazingly pardoned him. He too lived happily ever after.

Is there a conclusion to this? Have we reached a definite point? No, and we will probably never will. Robin will forever be in that romantic twilight between history and myth. Let’s just stick to what’s important here, and in all similar stories. People need heroes! Noble, witty, efficient heroes. The modern ones usually have capes, but I’m tights girl myself. 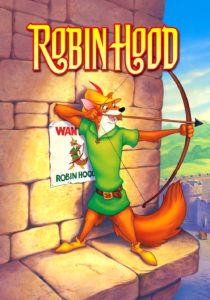 My first, and most beloved Robin of them all! The 1973 Disney film.