We have now reached the time of Aquarius – not the dawning of the age of Aquarius, that’s a different song. I’ve been dreading this sign, as its mythological origins are located in a dark part of ancient Greek mythology. Since there’s no way to go around this, let me face it head on.

So, thousands of years ago, in ancient Troy, a boy was born. His name was Ganymede, and he just so happened to be of exceptional beauty. Despite being the son of the King Tros, and therefore a prince, he had to do several tasks, even as a young boy. One of them was herding sheep. It was during one of those days that Zeus spotted him. Now, the problem with Zeus, was that he had no moral boundaries whatsoever. In this spirit, Ganymede’s young age, sadly wasn’t an issue.
There are two theories as to what followed, but the result is the same regardless. Ganymede was abducted either by an eagle sent by Zeus, or by Zeus himself transformed into an eagle. He was “chosen” to serve as the new cup-bearer for the Gods, and as a companion to Zeus, with everything that implies. His father was compensated with horses, and I won’t comment on that.

Up in mount Olympus, Ganymede, not only had to work as a cup-bearer, he also had to escort Zeus in all his journeys and expeditions, and of course, deal with Hera’s jealousy. According to the myth, he never lost his good spirit, and was always very caring and kind. One day he noticed a huge drought on Earth, and was deeply concerned with the suffering of the people. He asked Zeus’s permission to make it rain. Zeus agreed, Ganymede brought rain, and transformed himself into the figure of Aquarius we all know. For this act alone, he was granted immortality.

I don’t know if the philosophers reached a conclusion, and what could that be. Knowing how important etymology was, Socrates has a valid point, but I’m afraid Plato is right in this case. This is definitely one of the saddest stories of Greek mythology, and it has inspired artists and thinkers alike. The sign of Aquarius is located right next to that of the Eagle, and Ganymede is one of Jupiter’s moons, circling Zeus forever… oh the irony! 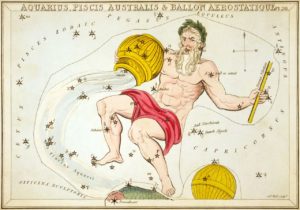 ¹If you are interested in the aforementioned ancient Cretan tradition, search for “Cretan pederasty”.