Ah, Pisces… I don’t know where you stand, but it is a love/hate thing for me. Truth be told, this is again one of those signs where, story-wise, there isn’t enough to be said.

So, once upon a time in ancient Greece, Gods and monsters alike were walking the earth. There was one in particular, the almighty Typhon, who would put horror writers and directors to shame. The descriptions vary slightly, as I guess the image of Typhon had been a fantasy battleground for the writers and painters of the time. Although they disagree on some things, like the number of his hands with the estimation being between 100 and 200, they agree on other things. He had one hundred snake heads, all venomous and spitting poison, he was so tall that he could “brush the stars”, his legs were spitting poison, his snake tails were spitting poison, his eyes and hair were spitting fire, and all this monstrosity, was stomping, hissing, and yelling.

Typhon played a huge part in the war between the Olympian Gods and the Titans. I mean, if you are going after the domination of the whole world, and you have him on your side, you sent him to battle, right? The sad thing is, that poor Typhon couldn’t possibly sneak up on his enemies… Greek mythology is filled with Gods and heroes, who heard him coming and managed to find enough time to flee.

This is what happened to Aphrodite and her son, Eros (or Cupid if it feels more familiar). They were peacefully bathing in a river, when they probably noticed the first waves from the stomping. It’s only logical that the horrible commotion followed, and mother and son thought it was about time to wrap it up. They asked for help, and Zeus sent them two fishes, who carried them safely away.

There is also another version (there always is another version, isn’t it?), according to which, Aphrodite and Eros turned themselves into fishes. The problem with this is, that the Gods didn’t need to earn a place in the sky for something like this. Honoring two random fishes makes far more sense.

Anyway, back to our story, I came across a very interesting symbolism. If you have seen the old depictions of the sign, you probably have noticed that the fishes’ tails are connected with a ribbon. There are some explanations for this, the obvious one being that the fishes were connected so that mother and child wouldn’t lose each other. The other two are slightly more spiritual. The first one is all about our life’s journey, with one fish pointing towards the world, and the other towards the Underworld. The other talks about what these particular Gods symbolized, love and beauty being eternally connected.

And Typhon? Oh, he was killed by Zeus alright. Some say he was firstly weakened by some fruits, others that he was promised a feast of fish and left his lair to eat. In any case, he is still lying down, under the volcano Etna, still occasionally spitting fire, or stomping his feet to get out. 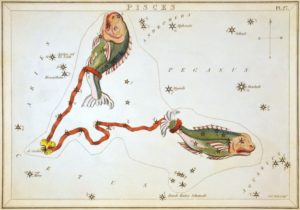