This following story is gruesome and macabre. It’s about an unsolved crime that shocked Greece back in the early 90’s. It’s also a crime that has affected me deeply, as I happened to be there when it was discovered. * harp music * – let the flashback begin.

It was June 25th, 1991. Athens was melting under a huge heat wave, and I was in a taxi, on my way to a friend’s house. On our way there, we had to cross a rich neighborhood, and by rich, I mean filthy rich, with beautiful villas, private streets, and practically no traffic – the Athenian Beverly Hills if you please. Suddenly we were caught in a huge traffic jam, where no vehicles could move in any direction. We were stopped in front of this wonderful house, and all around us were police cars and ambulances. It didn’t smell good… actually, it literally didn’t smell good. All jokes aside, this smell is something I will never forget. The driver asked me if I could understand what that smell was. I said no, and he calmly informed me that this is the smell of death.

In a time of no Internet, no cell phones, and no other way of being informed, I had to wait until the 9 o’clock news report to see what that was. It was worse than I had originally thought. So, these are the facts that led up to what I happened to witness.

The Chrysafidis family consisted of the parents Michalis and Liz, and their two sons, Michalis Jr (16) and George (18). Michalis was a very successful owner of a factory. Everything seemed to be normal in June 17th, when they were visited by a family friend. The friend discussed with Liz about a children’s party that would take place on the 19th. When Michalis didn’t show up at the factory on the 18th, his partners called his home. The telephone was answered by the Thai family’s butler, Praser Sertuansa. He informed them, and everyone else who called that day, that the family would be on vacation until the 28th. People were a bit suspicious, as this vacation seemed to be spontaneously planned, but they didn’t really put much more thought into it.

On the 19th, Praser Sertuansa’s wife informed her employers, as well as Praser’s mother and aunt, that a relative was very sick back in Bankgong, and that they should leave immediately. All four of them, the butler, his wife, his mother, and his aunt, left for Bankgong on June 21st.

As the days were passing by with no news, Michali’s nephew, Alexandros Makridis, a neighbour, and a business partner, became very worried and decided to take action. Late at night on June 24th they called for a locksmith and broke into the house. What they saw was more than a horrific crime scene. It was a site of massacre and torture.

Firstly, they discovered Michalis Jr. He was gagged and tied to a chair, almost all of his bones broken with a sledgehammer. In another room, they found George, again gagged and tied, killed by ax blows, and next to him his father, only tied on the wrists. In another room they found the body of Liz, dressed in an expensive, and very formal dress, but naked underneath. All murder weapons were there; the sledgehammer, an ax, and a pickax. The safe was filled with jewelry and bonds, but the cash was gone. Also missing was Michali’s brieface, which held very important documents. Everything else was untouched. They also found a handwritten will, leaving everything to Alexandros Makridis.

Yeah, I know, the butler did it. Did he though?

According to the coroner’s report, the children died first on the 20th, then the father on the 21st, and lastly Liz on the 23rd. The butler had been already in Thailand by then. What’s certain, is that the butler let the killers in, or knew they were in the house. Was he blackmailed to do so, or was he a part of the plan, we will never know. Greek authorities tried cooperating with the Thai police, but Praser was nowhere to be found.

Also, they way the killers treated Liz, does show an element of passion. As sad as I feel writing this, not only did they “play” with her by dressing her up, and God knows what else, they also forced her to experience the brutal deaths of her whole family. Simple thieves don’t have the luxury of time or the desire to toy around with one of their victims. This was definitely personal. 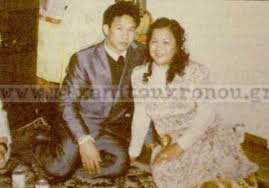 This crime remains unsolved. I guess things would have been easier with today’s technology. The thought that at least one man, Praser, knows but has chosen to remain silent, even after 28 years have passed, mystifies me. As far as we know, his relationship with this family was excellent, but then again, who are we to really know?

Disclaimer:
All photos are courtesy of the great Greek website mixanitouxronou.gr, aka “Michani tou Chronou” or else “Time Machine”.

Hansel and Gretel, or Hanz and Grete?