Hansel and Gretel, or Hanz and Grete?

Spring is finally here, the trees bloom, the birds are chirping, Easter candy is everywhere, and here I am, researching an old cannibalistic tale for you, because, well, that’s the kind of person I am! Put down the chocolate bar slowly, and follow me on this!

I guess you all know the story of Hansel and Gretel, but just in case you need to refresh your memory, this is the story of the two siblings who were abandoned by their parents, got lost in a forest and came across a house made out of candy. They started eating the roof (you have to start somewhere, don’t you?) until the evil witch who lived there felt the breeze, got out and caught them red-handed. She lured them inside by promising more food, and soon Hansel and Gretel realized they actually were the promised food. The witch tried to fatten Hansel by force-feeding him, and it worked, but Hansel was a clever little boy, who had noticed that the witch was almost blind, so he tricked her by giving her bones to feel. The witch decided that since Hansel wasn’t getting any fatter, a soup would also do, but she might as well put Gretel in the oven for an extra snack. Gretel was fast enough to push the witch inside the oven instead. They killed her – I don’t know if they also ate her, as I also don’t know if they ate the rest of the house too- and went back to their family where they lived happily ever after.

OK, this is a real mess. You have parents abandoning children in a forest, you have force-feeding, and cannibalism, all wrapped up in a lovely gingerbread house, like the ones people make for Christmas. Before you start accusing the German fantasy, keep in mind that this fairy tale was indeed conceived at the time of the Great Famine, which took place between 1315-1317. The brothers Grimm published the story in 1812.

Here’s the small twist though. Upon researching this, I came across a story, which, according to some is the real story behind the tale.

Sometime in the early 17th century, there was a famous German baker, called Katharina Schraderin. Katharina was especially known for her gingerbread, and I’m pretty sure she would be appalled by the ready-made ones found in the supermarkets in modern Germany. Anyway, there was also another baker around, called Hans Metzler. Hans was like the Mr. Plankton of the village, trying to get Katharina’s recipe. In his last attempt, he tried the romantic approach, which failed miserably. I guess this was too much for his ego, so he accused Katharina of witchcraft, ensuring the way to her heart, but in a more literal way. Katharina was arrested and tortured, but apparently passed the tests and was eventually set free. She returned to her home, which was secluded, and deep in the forest of Spessart.

Hans came up with another plan, which also required help from his sister Grete. The plan was simple, kill the “witch”. The siblings arrived at her home, killed her, and burned her in the oven to remove all evidence of their crime. Although they were eventually arrested for this, I don’t know what happened to them. All I do know, is that they had an excellent Marketing Manager, who was able to paint the real victim as the evil witch for all eternity, and the evil doers as innocent children.

Every time I come across a story like this, I spend an awful amount of time trying to find evidence supporting its validity. This story seems to be real, but I must add, that I did come across an article claiming that this is a hoax. The “real” story was published by a Hans Traxler. According to this book, a teacher by the name of Georg Ossegg, first heard Katharina’s story, and then found physical evidence supporting its validity, including Katharina’s original recipe (in case you wonder, it was hidden in the kitchen wall). Well, as it turned out, Ossegg isn’t even a real person, which means that this isn’t a real story. Still, it makes a fascinating read, just like all carefully written, plausible looking hoaxes. Man, you can never be too careful! 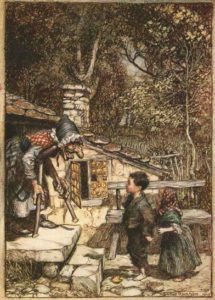