Taurus, Taurus… stable, strong, and powerful, but with a complicated story. Taurus has been a strong symbol in almost all ancient civilizations, up to the Roman Empire. The ancient Greeks added a romantic twist to it… wait, it’s not what you think! Ok, it is in a way, I give up.

As in most cases, there are many myths behind this sign, and no one can really prove which one is the most accurate. I will present you with three different versions, with the one I think makes sense, at the very end.

I’m going to start off with the most known, a story that shares the same beginning as most ancient Greek stories. Zeus spotted a girl he wanted to “get to know better”… In this case, the fair maiden was named Europa, and she was playing happily with her girlfriends on a beach, somewhere in Greece. Zeus turned himself into a magnificent white bull and appeared in front of the girls. He was so beautiful and timid, that the girls started playing with him, decorating his horns with flowers, and so on. It was during this time that Europa had the bright idea to jump on his back. Zeus plunged immediately into the sea and swam to Crete. On that other beach, Europa conceived three sons; Sarpedon, Rhadamanthus, and Minos, the King of Crete who introduced the worshiping of the bull.

Sounds right, doesn’t really work. See, the Gods, never immortalized their own achievements like that. If that had been a random bull that had helped Zeus out, then yes. I mean, from all the abductions and rapes, why this one?

The second story involves Hercules and one of his tasks, killing the Cretan bull. This was added later, in an attempt to connect all 12 of his tasks to the 12 signs of the zodiac. Nothing to see here, move along.

Now, this is a story I like, and it does make sense.

You have heard about Persephone, right? The daughter of Godess Demetra, who was kidnapped by Pluton and was forced to spend six months in Hades, and six on the surface of the earth, bringing spring, fertility, and fruition wherever she went.

One of those times, while she was freely roaming the spring fields, she came across Cerus. Cerus was a fierce, and an enormous bull who was wandering alone in the countryside, trampling villages, and destroying properties. No human had tried stopping him, as they thought that because of his size, he was immortal.

The moment Cerus and Persephone met, they created a magic bond. Cerus sensed her psyche, which calmed him down, and Persephone taught him how to use his strength in a wise manner. From then on, every time she comes to the surface, Cerus is waiting for her, carrying her throughout her journey. When she returns to Hades, Cerus goes back into the sky. See? I told you it was romantic.

Forget all about abductions and the such, switch off your computers and go roam in the fields. Persephone is already here! 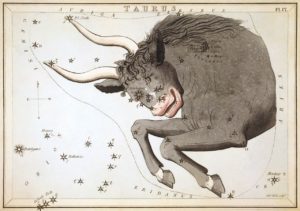