… and we move on with the signs, this time doing Aries! The story is long, but not complicated (too many Greek names people- my apologies in advance), and it features an evil stepmother that can put the ones from the medieval fairy tales to shame! Let’s get started, shall we?

So, once upon a time, in an area of Greece called Boeotia, the good King Athamas was married to a nymph called Nephele. They had two children, the twins Phrixus and Helle. The marriage wasn’t meant to last long, and Athamas divorced his wife for a woman named Ino. Let’s just say that Ino wasn’t so happy with her stepchildren and decided to take action. Of course, it’s not so easy to get rid of the King’s children so easily, so she came up with a cunning plan.

Firstly, she poisoned/roasted/destroyed (the way she did it is unclear) all the local crops, bringing the kingdom on the brink of famine. The people and the King, completely distraught, did what the sensible people of their time would do; they asked advice from the oracle of Delphi. Ino was one step ahead of them there too. After bribing the messenger, she made sure that the King would receive the following message: If you want to save your kingdom from starvation, you have to sacrifice your children. Overlooking the fact that the readings from the oracle were never so clear, Athamas decided to proceed with the sacrifice.

It was then, at the very last minute, that Nephele, with the help of Hermes, sent a glorious ram, with golden fleece – excuse me, a flying golden ram- to pick up the children. They were instructed not to look down during the flight, but Helle couldn’t resist temptation. She fell to her death on the narrow stretch of sea now called Dardanelles, and Hellespont for the Greeks. The ram carried Phrixus safely to the kingdom of Colchis, ruled by King Aeetes. Does the name sound familiar? Yes, he was the father of Medea.

Now, how do you treat a magnificent, flying, golden ram who just saved your life? You sacrifice it of course, offer some meat to Zeus, eat the rest, and oh, by the way, offer its golden fleece to the King who welcomed you. Fair enough, right? Maybe you remember, maybe you don’t, but this is the same fleece, Jason grabbed, starting a vicious circle of death and destruction, but this is a whole different story.

That was the story of poor Aries, a magnificent creature, who apart from flying, saving people, and being gold, apparently tasted so good, that Zeus decided to put him in the heavens for all eternity. I hope he was washed down with some good wine… 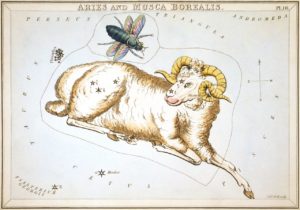