For people like me, London of the Victorian era is and will always be an endless pool of stories. I think the reasons behind this are part of a huge sociological study and we don’t have space for it- plus it could be awfully boring, so, let’s talk about one of the most notorious legends of this time, the Steel-heeled Jack!

I’ll do my best to stick to the facts here, as I always do, which in this case is a difficult task. There is a vast amount of information regarding Jack, far too many theories, and lots of not-so-trustworthy reports from the era.

Jack’s first sighting was recorded in 1837. He used to jump out of nowhere and attack carriages, grope women, scare small children, and act like a prankster, until he would hop off into oblivion. There have been reports all the way through 1904, but it’s needless to say that most of them, especially the later ones, are highly disputed.

All of the victims survived to tell the story and describe him. According to them, he wore a tight and shiny suit, a large cloak, a helmet, he had long iron claws, and he was breathing white and blue flames from his mouth. “White and blue flames?” Yeah, I know how this sounds, but check this out.
Lucy Scales was attacked by Jack on 28 February 1838, and as a result of said flames being fired into her face, she lost her sight. That was the biggest recorded injury caused by Jack.

Now, all this sounds slightly supernatural, doesn’t it? That was also the idea of the people of the time, although Sir John Cowan, the Mayor of London, tried to publicly address the issue, and called it out as a “pantomime display”. As the legend was beginning to spiral out of control, and Jack would be used as the boogeyman (well, until the next famous Jack of the era came along), some suspects were put on trial, but they were all released due to lack of evidence.

Oh, speaking of which, Thomas Millbank was one of those suspects. He had actually boasted that he was Jack, and that he attacked Lucy Scales. During the trial, he was asked if he can breathe white and blue flames (or any color I guess) from his mouth, to which he replied “No” and he was free to go home! Kinda makes sense…

One interesting fact is the main suspect in this case. Meet Henry de La Poer Beresford, the 3rd Marquess of Waterford! Henry was a filthy rich, eccentric aristocrat who hated women, and was known for his brutal pranks. He was actually jump-scaring the horses of carriages in the past, as a dare. Of course, nothing was proven, and I dare say that because of his status he was untouchable.

As someone born in the 20th Century, though, I wonder… rich aristocrat, wearing capes, attacking at night, holding some chemical secrets for the flames, and some advanced gadgets to go with them. He would also surely have a loyal servant… The first super villain, in a time of no super heroes? 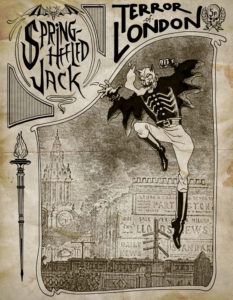