Well, Halloween is over, the scary clowns seem to be over, and the next scariest thing, the presidential elections in the US, will soon also be over. Given the chance, let’s cross the Atlantic and let me introduce you to Dan Rice, the man who managed to combine most of those mentioned above.

Dan Rice was born in 1823 in New York City. He was an entertainer, in the broader sense, and during his time he was really famous. How was he entertaining? Well, he was a famous clown! Okay, maybe I don’t do him justice… He was more than that.

Dan was an animal tamer, a singer, a dancer, a director, a producer and list goes on and on. As a matter of fact, he was so famous, that (while still a clown) he actually ran for Senate, Congress, and finally for the Presidency in 1867 with the Democratic party. I don’t know if this was part of a larger comedic skit, but he dropped out of every single race.

I know what you are all thinking, but keep in mind, that being in a Circus had a different social status back in those days. At least, not only did he not have to hide it, he didn’t even have to pretend not to be a clown – if you get my drift.

For some reason, not many people know Dan. Closing this, I’d like to share you the two things of his legacy that you all know.

Firstly, he was the model behind the figure of Uncle Sam!
Secondly, he came up with the term “to jump the bandwagon”. I have been able to find a bunch of different stories, as to how this happened, so I’m not sure which one is correct. All writers do agree though, that he is responsible for it.

Dan died in 1900, penniless. He has been called “the most famous man you’ve never heard of”, but hey, this is why I’m here! 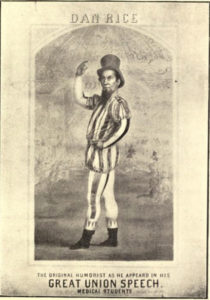