So, once upon a time in ancient Greece, there was a mythical hunter, with gigantic proportions, called Orion. You might have already heard of the constellation and its famous “belt” or you might be Metallica fans! In some of the earliest works of Greek authors, like Homer and Hesiod, Orion is already mentioned as a constellation, and in the Odyssey, Odysseus meets with Orion’s shadow in Hades. What this tells us, is that his story is ancient, even for ancient Greeks!

There is some lore about Orion, things like him being able to walk on the sea, or having raped Merope and her father blinding him as punishment. There is also the story of how he met with God Hephaestus and he managed to get him close to the sun, or Helios since we are keeping it Greek, and Helios cured his blindness. The story I will tell you though, is about his death.

One of the most important concepts of Greek philosophy, is the one of “hubris”. Hubris is now synonymous with pride, arrogance, or pomposity. In ancient times though, it was a crime, connected to willingly humiliating or degrading a victim for the pleasure of the doer, or even worse, defiance and excessive pride towards the Gods. It would then lead to “nemesis”, or divine punishment/justice. I know that both words have slightly different meanings now, but this was the original concept.

So, Orion was a famous hunter. He was so famous, that he used to hunt with Goddess Artemis and her mother Leto. That was when he crossed the hubris line and claimed that he is so powerful, that he can actually kill all the animals of the Earth. Artemis was a bit of an edgy character, and decided to punish him by sending a gigantic scorpion after him. Orion fought bravely, but sadly he was no match for the powerful scorpion.

During that time, Zeus was apparently bored, and the intense fight caught his eye. He decided to immortalize the winning scorpion by putting him up in the sky. Artemis asked him to also put Orion up there, as a reminder for the rest of the boasting humans. The fun detail about this arrangement is, that those two constellations rise at different periods during the year. The Scorpio has been chasing Orion through eternity! (Yes, we are stubborn like that)

This mighty Scorpio can also multitask. According to a different myth, the son of Helios, Phaeton, got the Sun-Chariot for a day. The young boy got scared, and lost control of the horses carrying it across the sky. Firstly, he froze Earth, as he drove too far off, and then during a panicky dive, he scorched northern Africa, creating the Sahara desert. It was then that Zeus made the Scorpio sting him, and end the possible destruction of the planet. Phaeton plunged into a river and promised never to take dad’s car again!

Orion should already be visible in the night sky. Next time you see him, just tell him that now you now know what he did! 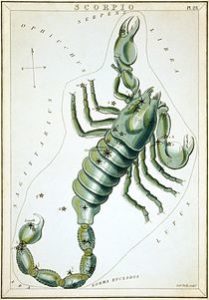