So, I was talking on the phone with a dear friend of mine, and she complained that I have gone from writing once a week to writing once a month. I said no, and besides, if that was the case, you would only see the signs mythology posts back to back. I guess deep down I don’t want to prove my friends wrong, so here’s Sagittarius, almost directly after Scorpio.

Ah, Sagittarius… Powerful centaurs, bows and arrows, raw power. This is what comes directly to mind, right? Think again, and to make you feel better, I was in the same boat too. Truth be told, Sagittarius has complex origins, matching only those of Virgo. If someone had asked me on the street, I would have spontaneously replied “the centaur Chiron”. Then I realized that there already is a planet named Chiron, and there’s also the constellation of the Centaur. So, what the hell is going on? I’ll present you with all three possible explanations.

Firstly is the most common origin. Sagittarius identifies as the centaur Chiron, a wise and immortal centaur who served as a healer and tutor to many heroes, including Jason and Hercules. Chiron was accidentally shot by Hercules with a poisoned arrow. Yes, that moron did it again. Anyway, since he was immortal, he couldn’t die, but he was suffering from excruciating pains. He offered to trade places with Prometheus, and sacrificed his immortality. For this, Zeus honored him by creating the constellation of… wait for it, Centaur. Nope, it’s not Chiron.

The second story involves Chiron, but in a different way. According to this legend, Chiron came up with this constellation to offer guidance to Jason and the Argonauts. Ok, that could work…

And now for the winner, the theory of Eratosthenes. By the way, Eratosthenes was a prominent scientist and astronomer who managed to calculate the circumference of the Earth in 100BC. He was about 66km wrong… and needless to say, you don’t start measuring the circumference of something unless you know for a fact that it is a sphere. I digress, back to our story.
Eratosthenes suggested that Sagittarius is named after a very famous Satyr, Crotus. Crotus was the son of Pan and the nurse of the Muses, Eupheme. Having lived among the Muses, he was a famous musician, but that’s not all. He was a famous hunter, he would often hunt on horseback, and he was the inventor of the bow, thus the inventor of archery. Another thing he invented was applauding! Fun fact: in Greek “krotos” means a loud noise; check “crotophobia”.
So, what you will decide to see in this constellation is up to you. It can be Crotus hunting on horseback, Crotus posing with his hairy goat feet, or if I haven’t changed your mind, Chiron. 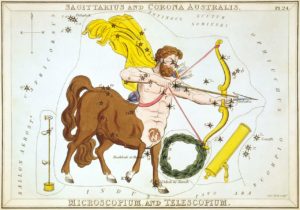