A month has passed, the Sun in well into the sign of Libra, and here I am, researching the mythology behind the constellation. Alas, and I apologize to all my Libra readers, there’s not much to write…

See, the problem is that Libra is the only inanimate sign. Throughout the ancient civilizations, it was considered to be either “the claws of Scorpio”, or “the scales of Justice”, held by Dike/Astraea (see the article on Virgo for more details).

The Romans are mostly responsible for isolating the sign, since according to the myth, the Moon was in Libra when Rome was founded.

Before them, the only civilization which gave credit to the sign itself, was the ancient Egyptians. According to them, Libra was representing the scales of Anubis, with which he would weight the hearts of the dead against a feather. Yes, it sounds like that scene from “The Knights of the Round Table”, but it was more complicated than that!

Well, that was short, and just to piss Libras off, slightly unbalanced!

Stay tuned for Scorpio, we will be getting back into Greek monstrous adventures. 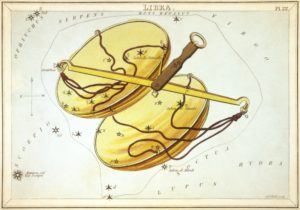