Now to the Brocken the witches hie,
The stubble is yellow, the corn is green;
Thither the gathering legions fly,
And sitting aloft is Sir Uriaii seen:
O’er stick and o’er stone they go whirling along,
Witches and he-goats, a motley throng.

Oh yes, friends of the occult… tonight’s the night, where the witches gather in Brocken for their feast. Tonight is the night where the veil between the spiritual realm and our world is at its thinnest. Tonight is Walpurgisnacht, or Walpurgis Night.

The simplest research on the topic will tell you all about Saint Walburga, and how she helped spreading the word of Jesus in the pagan Saxon population, and although this indeed happened, the truth of this celebration lies way before the Christian times, as it is almost always the case.

Let me take you back, when pagans used to celebrate Beltane on this date. It was a feast of fertility, marking the changing of the seasons, and the full bloom of spring. It was celebrated out in the open, with huge bonfires, excessive drinking, meticulous house cleaning, and, of course, other acts symbolizing fertility…

Then came the Christians, and with all due respect, the party was over. As a matter of fact, it wasn’t exactly over, it just changed its theme. See, now the bonfires were there to keep the evil witches away, and people would make noise to scare them off and so on… I guess the drinking and the other “non-christian” festivities stopped altogether, though. As it has happened with most adopted ancient festivals, this too was demonized.

Although the date was connected with Saint Walburga around 900 AD, the festivities had kinda ceased, and the lore was almost forgotten, until the most famous of all German poets, Goethe, put it back on the map. It was after the publication of “Faust” in 1832, and that wonderful scene that takes place on Brocken, during the frantic gathering of the witches, that people took interest in that old tradition. Slowly after that, bonfires started lighting up again on that night.

It wasn’t just Goethe, though. It was a general shift in the way people started acquiring and using their knowledge. It was a whole revival movement, and the modern pagans. Still, if you live in one of the countries that celebrates Walpurgisnacht, and you come across one of the bonfires, don’t bother to ask the attendants if they know what they are celebrating. Chances are they’re there for the booze… 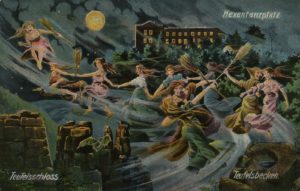