Imagine you have done something bad, I bet it’s not that difficult, we’ve all been there. Now imagine that what you did was so bad, that people turned your last name into a verb, immortalizing you and your act. That’s taking it a bit over the top, right? Well, this is what happened to Charles, whose last name I will reveal at the end of the text. Hey, no scrolling! Play fair because your name might have a similar fate.

Charles was born in England in 1832. There’s nothing particularly interesting about his life, only that his service in the army brought him to Ireland and gave him the nickname “Captain”. After retiring from the army, he remained in Ireland and became a land agent.

Lord Erne was a huge landowner and he hired Charles as an agent for his huge estate, which included castles, mansions, farms, and of course the cottages of the farmers and the farmers themselves. Lord Erne, as most of the aristocrats of his time, was living abroad and Charles was to manage everything in his absence. Charles was a responsible adult, who didn’t only take his job seriously, he also aimed to please his aristocratic employer.

Here’s the deal though. We are talking about Ireland in the late 1800’s. Things were not going well and the population was trying to prevent a famine. That was when the Irish Land League proposed the “Three F’s”, which stands for fair rent, fixity of tenure and free sale. The idea was to relieve the farmers of the high rent, and eventually turn them into the owners of the land, among other things. The program offered a series of measures and was embraced by the farmers.

Charles refused to comply, to the point where he managed to be hated and shunned by the whole community, from his employees to public services. By the time his farmers and seasonal workers had stopped working on his fields, Charles pushed things a bit further, by writing an open letter that was published in The Times, stating he was under attack by Irish nationalists.

What did the British government do? They sent laborers from other counties, a whole Hussar regiment, and roughly 1000 soldiers to aid Charles with harvesting his crops… The harvest was finally worth 500 pounds and costed 10.000. Nobody was happy with Charles, not even Charles himself. Shunned by everyone, he returned to England.

This, my dear readers, was the story of Charles Cunningham Boycott.

The term came about by Father O’ Malley, who claimed that “to boycott” is easier than “to ostracize”. 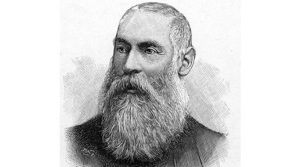