Hm, I bet you are all expecting an article on the origins of Halloween, right? Sorry folks, it’s not gonna happen. I thought I’d better save something for next year. Still, on this special night, where the souls of the dead roam our world, I have one of the most macabre real stories for you all!
*puts lit flashlight under her chin * Cover up in your blankets and listen carefully.

Once upon a time, in the city of Nizhny Novgorod, in Russia, Anatoly Moskvin was born. Anatoly was a very curious and intelligent boy, who grew up to be an academic linguist. He was fascinated by death, and he used his studies and specialties to dig into the ancient myths and lore, in order to understand it better.

He always used to say that the turning point in his life, was when, as a child, he watched a funeral procession for the first time. It was that of an 11 year old girl, and Anatoly was pushed and forced to kiss the corpse. From then on, Anatoly started visiting cemeteries as a hobby, kept on studying hard, and overall led a very secluded life.

It must have been very lonely for Anatoly. He could speak 13 languages, he was a recognized and published expert who had the full respect of his peers, but he had no one to talk to. I guess it was around then, when Anatoly started hearing the voices. There were dozens of little girls calling out to him, asking for his care, support, and friendship. There was a catch though -all those girls were dead.

He couldn’t resist the calls, and he felt so bad, because all the girls complained that they were cold and lonely. Anatoly started digging them out, slowly, one by one, until the voices would stop. The girls were brought back to his home, where he kept on digging into his books to find the way to bring them back to life.

He was faced with a huge problem though… if he indeed managed to resurrect them, their already decomposing bodies wouldn’t be able to sustain this new life force. That’s when he had a breakthrough moment, and in order to preserve them, he turned them into dolls. He achieved that by following a simple mummifying method with salt, rags, wax, and nail polish. He then posed them around the house, as dolls, where even his parents were fooled.

Now, don’t creep out on me. Anatoly claims to this day, (yes, he’s still alive), that he viewed them purely as his children, and he acted out of sympathy for them.

He was arrested in 2011, after police started an investigation on grave desecrations in the area. They found 26 “dolls”, all girls between 3 and 15 years old.

After undergoing a psychiatric evaluation, Anatoly was diagnosed with paranoid schizophrenia.

As I write these lines, he’s incarcerated in a psychiatric clinic, but to be honest with you, I don’t know if he still hears the pleas from the dead for warmth and comfort.

P.S for those of you who want to take this a step further, there are many pictures of the actual “dolls” online. A simple google search would do. 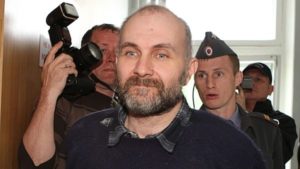