Have you seen those idiots, that used to run around on horses, covered in white hoods, burning crosses and performing crimes of unspoken cruelty? Well, I sure hope you have only seen them on TV, books, or websites, and never up close and personal! This is the infamous Ku Klux Klan. Bad news is, they still exist, although they have been fought, and gone through some turbulent times themselves. Well, the latter is no wonder, considering not only what they stand for, but also their collective IQ of 20 more or less… I won’t be writing a full article on the KKK here, I just want to give some insight on the details you probably don’t know, like the fact that a big part of this, is indeed a bad joke, based mostly on fandom… *sighs * Let’s begin.

The first Klan was founded by ex-Confederate soldiers, sometime between late 1865 and 1866. It had a more fraternal character, as it was fitting for a support group of bad losers. According to many historians, the name derives from the Greek word kuklos (κυκλος), meaning “circle”. As the US entered what is now known as the Reconstruction Era, things got a weird turn, and the Klan decided to add some flare to its white supremacy theme. According to historian Elaine Frantz Parsons, that’s when they started dressing up, mostly as the ghosts of Confederate soldiers, but also had the fashion sense to add animal horns, polka-dotted hats, sacks of flour, whatever was handy and, of course, white… This movement was suppressed, and almost faded until 1915, when something stirred everything back again…

See, 1915, saw the release of a very important film, D. W. Griffith’s “The Birth of a Nation”. The script was based on the novel and play, “The Clansman” by Thomas Dixon Jr. The film was not only a huge success, it was also technically innovative, and set a milestone in film-making. Nevertheless, it was a three hour long praise of racism and the KKK… They were portrayed as true American heroes, wearing white hooded onesies and burning crosses. The white supremacists rejoiced, and unaware of the fact that this would be called “Cosplay” after 100 years, they happily adopted Griffith’s aesthetics for the Klan. From that moment on, this characteristic costume, would become a synonym of pain, hatred and violence.

As for the burning cross itself, the story goes a tad further back. Thomas Dixon Jr, admitted to have been inspired by Sir Walter Scott, the famous author of “Ivanhoe”. Scott, in his poem “The Lady of the Lake”, had used the image of a burning cross, albeit one shaped as an X, to signify an ancient Scottish ritual of calling a meeting. As an “X” shaped cross wouldn’t mean much to the audience of the time, he turned it into the christian one.

This covers the story of the appearance of the Klan. It would take tomes to cover the story of the Klan itself, or of its crimes. I could go on, and on, and although I’m not that white, I’m not afraid. I can come up with a cosplay costume too, on the spot, if needed! 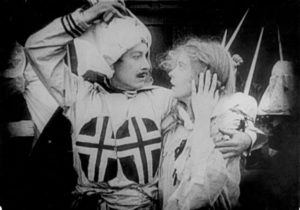 Photo: Scene from “The Birth of a Nation”
Source: ameripics