Ok people, I know that the sun is shining, and that spring is already here, but, I did come across a wonderfully macabre story which I must share. It’s the rather sad story of a man who managed to attract all the bad luck of the world, even after his death. Ladies and gentlemen, this is the story of Elmer McCurdy.

Elmer was born in Maine in 1880, in a broken up family from an unknown father, something that was a huge social stigma back in the day. To cover up the shame, he was adopted by his uncle. When he learned the truth, he was a teenager, and as all teenagers, the news didn’t really sink in. He rebelled against everyone, took into drinking and was soon an alcoholic.

Following the deaths of most of his family members, Elmer started a nomad life, drifting from state to state, drinking his life away, and doing small-time jobs. It wasn’t long before the first arrests for public intoxication began, and with them, a new career in crime.

Around that time, Elmer thought that a train robbery would probably solve some of his financial problems. Since he knew how to use nitroglycerin, he thought he could use it for blowing up the vaults. The problem was, that he wasn’t as good as he thought with it, and on numerous occasions, he actually destroyed the money together with the vault.

Then Elmer got a tip, that one particular train would be carrying 400.000 dollars in cash! He set up everything for the robbery, and managed to stop the wrong train… The loot from the one he did rob, was 46 dollars, two bottles of whiskey, a coat, a clock and a gun… As if this wasn’t the worst, he had been identified. The police with the help of bloodhounds, located his hiding place, and Elmer was shot dead during his attempted arrest. It was 1911.

So far so good, right? Wait, there’s more…
His body was moved to the Johnson Funeral Home in Oklahoma. There it was embalmed with huge quantities of arsenic, as the procedure was back then. The body was supposed to remain in the Home, until a relative would claim it. Months started passing by and no one did. The director of the Home, in an attempt to get some of the embalming money back, propped the corpse and started showing it to people for money.

Five years later, and while the body was still on display, two men came forth as Elmer’s brothers and claimed the now mummified corpse. Turns out that these two men were the owners of a traveling carnival, who, upon hearing this story, decided to add Elmer to their exhibits. Poor Elmer was on tour until 1922. The body was then bought by another traveling carnival, the self-called “Museum of Crime”. Then came another one, and another one, until Elmer ended up in a warehouse until 1964. By then, the body had shrunk and the newest generations seemed to have forgotten that it was an actual body. Elmer started a new career as a prop in films and TV series, until 1976, where one hand fell apart and the filming crew realized in horror, that this prop used to be a human.

Elmer received a proper burial in 1977… Fearing that some might attempt to steal the mummy, authorities poured cement on top of the casket. 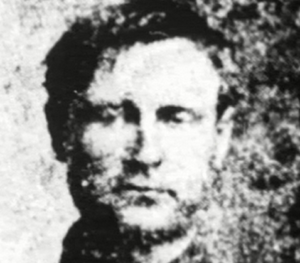