How far would you go to prove your point? How eager are you to show the world that you are right? Assuming you are willing to push it to the limits, the important question would be, is it worth it? Have you heard of Garry Hoy?

Garry was born in 1955 in Toronto. He was apparently a very successful lawyer, which means that he actually made a living from proving points and winning arguments, something that eventually got him to be featured here.

Garry was working for the Holden Day Wilson law firm. Their offices were on the 24th floor of the Toronto Dominion Bank Tower. Now, I don’t know when the Tower complex was finished, but Garry was thrilled with the windows. There was something in the strong metal panes, and the unbreakable glass that made him oh so proud to be there.

He developed this game, where, in order to prove the toughness of the glasses to innocent spectators, he would run, crash into them and then he would bounce back laughing. Although I think Garry had a playful spirit deep inside, as he would pull this trick to all newcomers, do not forget that his main reason was to prove his point, that those windows were in fact the safest.

All was going well, until one day in July 1993. Garry performed his trick to a group of apprentices during a reception, when the window frame caved in and he fell to his death from the 24th floor. The irony (or at least one of them) is that it wasn’t the glass that broke, but the frame. Point taken!

Garry found a nasty way to go down in history (poor pun intended) and since 1996 he is the proud owner of a Darwin Award. 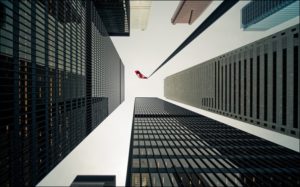