As of this month, I’m introducing a new topic, which will feature one article per month. See, the macabre, eccentricities, and human stupidity are endless, so I thought we could all lift our gaze higher for a while and dive into the history of the constellations. June is the month of Gemini, so for all of you wondering, this is how it came to be.

Ever since ancient Babylon, this constellation has been known as “the twins”. Each civilization has an epic story or two about the twin brothers that earned celestial immortality. Still, since the official astronomical names are based on the ancient Greek mythology, I will present you this version of the story.

Most of the ancient Greek stories tend to start in the same way, more or less, and this one isn’t an exception. Which way might that be? Well, by Zeus spotting a hot mortal… In this case it was Leda, Queen of Sparta, wife of Tyndareus. Zeus transformed into a magnificent swan and seduced Leda -don’t ask… She, of course, gave birth to two eggs, one containing Helen (yes, the one of Troy) and one containing the twin brothers Castor and Polydeuces, or as they are more commonly known, Castor and Pollux. You will also find them called “Dioskuri”, literally meaning “sons of Zeus”.

One of the early achievements of the brothers, was saving their sister. Helen must have been prettier than we all think, since apart from the known story, she was also kidnapped as a child by Theseus, who intended to marry her when she would become of age. The brothers invaded Athens, dethroned Theseus, saved their sister, and in an act of revenge, kidnapped Theseus mother, Aethra, and brought her to Sparta.

Disokouri were truly their father’s sons, and they proved that when they fell in love with the sisters Phoebe and Hilaeira. The problem was that the sisters were to marry two other twin brothers, Idas and Lynceus of Thebes. (Too many Greek names, I know…) What would their father do? Well, what they did! They abducted and raped the girls, and each gave them a son. Of course a feud with the other family was inevitable. It started off innocently enough with an eating contest and ended up with an ambush where Castor was fatally wounded.

I know what you all think. Nothing in their story is actually a heroic achievement. Still, if your father is Zeus, you kinda have an advantage regardless. While Castor was dying, Pollux was asked by his father to join the other Gods in Mount Olympus. Pollux chose to share his immortality with Castor, and the brothers would from then on live on both Olympus and Hades alternatively. Zeus honored this decision by immortalizing them both with the constellation of Gemini.

The brothers were worshiped particularly in Sparta, and they were also said to protect the sailors. In ancient Greece they were considered responsible for the phenomenon that is commonly known as “St. Elmo’s Fire”. 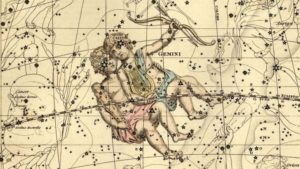