The sun has entered Leo, and as planned, I sat down to write the story of the constellation, but alas, and such a shame for such a glorious sign, the story isn’t that interesting…

The story is again about our friend Hercules and his twelve tasks, and from the looks of it, you will probably learn all of them by the time I finish the zodiac…

So, once upon a time, in Nemea, an area in the Peloponnese, lived a mighty lion- let’s call him Leo since he was never named! Leo was the brother of Hydra, also a child of Typhon and Echidna. He was bigger than any usual lion, and his skin was impenetrable. He lived in a cave that had two entrances, and this is where he was luring poor passengers who were on their way to Zeus’s temple, or young girls who well, were unfortunate enough. Yes, if you think this is again connected to the shaky relationship of Zeus and Hera, you are correct. Leo was put there by her, to block the worship of her husband.

Upon arriving at the cave, Hercules fought in the way he knew best. He attacked Leo with arrows which soon proved to be completely useless. Although he wasn’t the sharpest tool in the shed, he immediately came up with a back-up plan. He blocked one of the two entrances to the cave, and trapped poor Leo inside. Mythology gives us two variations of how the killing that followed came about. Hercules either bashed Leo on the head with his club and then strangled it, or broke its spine by holding it from his legs… ouch!

Since he needed proof that Leo was dead, he decided to remove the pelt and bring it to King Eurystheus. The problem was of course that no conventional tool could penetrate the skin. In what was probably the brightest light-bulb moment in Hercules’s sad life, he used Leo’s own claws for the skinning!

Eurystheus was convinced and relieved when he saw the pelt. He let Hercules keep it, and our hero, not only did, but he turned it into one of the most iconic hero capes in history! Besides, it offered amazing protection from back-stabbing enemies!

How come Leo was honored with a constellation, is a subject of debate. It is believed that it was Hera’s idea, since she was filled with guilt. Others say that this myth is irrelevant, since this constellation had always been seen as a lion ever since ancient Sumeria, but let’s not get into that. * winks* 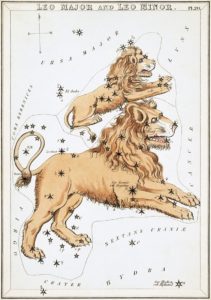