I’m sure you have all noticed the increasing pace with which fake news and hoaxes are spreading. There were always hoaxes, but back in the days, it took more to make a bang than just a click-bait. Let me introduce you to a woman who almost got away with it, ruining some careers along her way, Mrs. Mary Toft.

Mary was born in 1701, in Godalming, Surrey. She was married, had three children and was working as a servant. In 1726, and after a miscarriage, while she was working in the fields, she chased after two rabbits but failed to catch them. She said that after that, she had a craving for rabbits, but since they were poor, she couldn’t afford their meat. One month later, she started giving birth to rabbits…

Yes, you read that correctly. Mary was giving birth to rabbit body parts, almost on a daily basis. Now, this isn’t the kind of news that will be kept quiet in a small rural community, right? Right! News spread fast, and all the local authorities were excited – and a little grossed out I presume- to hear of this miracle. Imagine if they were actual, live rabbits…

Anyway, among those men, was John Howard, a local surgeon. John couldn’t find anything wrong with this and he kept on spreading the news and his wonder, higher and higher, until it reached Nathaniel St. Andre, surgeon to the King himself. One might think that this was the end of this mockery, but no. A whole army of scientists was convinced that they were in the presence of a miracle. It took one German doctor, Cyriacus Ahlers, to notice that the rabbit parts had traces of hay and corn, meaning they were alive, eating happily in the fields, and minding their own business before the “birth”.

Still, this wasn’t enough and Mary was brought to London for further inspection and close examination. Amazingly, while being monitored she stopped giving birth to rabbit parts… hm, I wonder. While the calmer people started gathering information against her in the background, Sir Richard Manningham , a prominent physician, told Mary, that given the circumstances, he was going to perform a long operation during which, he would remove her uterus for examination. What do you know? Mary confessed on the spot.

I won’t get into more details, I’m sure you can imagine all the gruesomeness behind this. Needless to say, she actually did need real treatment, as this practice had resulted in a huge infection. The careers of most of the doctors who bought into this, were destroyed, and London’s high society had something to be laughing about for a long time.

What’s not a laughing matter, is everything behind this. The amount of people willing to give “birth” to things for their own motives, and the gullibility of the victims. This hoax wouldn’t have a chance in our society, but others still do. Be careful of wonder-rabbits! 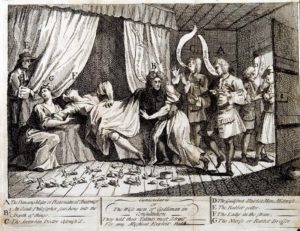