You know how sometimes the answers to some of the biggest mysteries, is something very mundane and simple? I present to you Ergotism! I know how it sounds, but it’s not a boring philosophical theory, you can keep on reading this.

Ergot is some kind of fungus that infects rye and some cereals. It’s extremely toxic and can cause a severe poisoning, called ergotism. I won’t get into chemical details over the toxicity of this fungus, I will just say that one of its main derivatives (Ergoline) is the famous drug LSD. “Hallucinations” was the first thing that came into your mind, right? And that’s not all. The symptoms of ergotism are really severe and sometimes gangrenous. Apart from what I’ve already mentioned, it can cause psychosis, spasms, seizures, vomiting, delirium and so on. Fun fact: the kind of ergotism and its symptoms are affected by the soil, meaning that two affected regions can have different symptoms.

Do you know where you can find a lot of rye? Salem!
Linnda R. Caporael, a scientist at the Rensselaer Polytechnic Institute, connected the dots and published an article in 1976, where she claimed that the “bewitchment” at Salem, that caused the infamous trials, and death of more than 20 people between 1692-93, was the result of ergotism.
Of course, there is a long debate over this, and of course there are various valid arguments on both sides. The key to this claim is in the fine details, like the soil we mentioned above.

This theory has also been used for the “Dancing Plague”. Ever heard of that? On a fine July morning, in Strasburg, in 1518, Mrs. Troffea started dancing on the street, without any explanation or reason. Our medieval ancestors apparently knew how to party hard, or Mrs. Troffea was really rocking it, and although the start was rather quiet, the party lasted almost a whole month (non-stop mind you) and roughly 400 people kept on dancing until they started dying of exhaustion, heart failure and so on. Energy drinks came way, way later!

Hey, I don’t want to see any bizarre increase in the sales of raw, organic cereal in the next days! Are we clear? 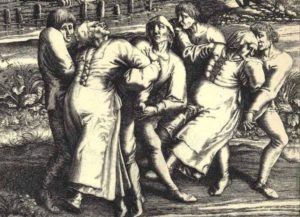