Our next story is one of a unique love affair between a Swedish woman and a German man… wait! *sound of screeching car brakes*

Eija-Riitta was born in Sweden, in 1954, and ever since she was a child, she was fascinated by constructions with parallel lines, like railroad tracks, bridges, fences and so on. This fascination turned out to be a bit more than what you might think, and I don’t know when this happened, but she was diagnosed with Object Sexuality (objectophilia).

When she was 7 years old, she saw the love of her life on TV. If we want to really be exact here, she saw her love being born – and I don’t know how many of you here can claim a similar experience! It was the Berlin Wall, or as she has said, “the sexiest wall ever existed”. Eija-Riitta started saving up money to visit Berlin, and after numerous visits, and in front of a few guests, she actually married the Wall in a humble ceremony in 1979. She then took the name Eija-Riitta Berliner-Mauer.

Alas, the happy married life didn’t last that long, and ten years after, Eija-Riitta was devastated to see “him” being torn to pieces. One of her actual quotes, that can be found online, reads “What they did was awful. They mutilated my husband. The last few years have been very difficult for me since the attack on my spouse. ” She now considers herself a widow, and she has never visited Berlin again.

Eija-Riitta has inspired the film Berlinmure, which was featured in the 5th Berlin Biennale. She has also been asked about other monuments, and one of my favorite quotes is this, “The Great Wall of China’s attractive, but he’s too thick – my husband is sexier.”

According to the latest reports, Eija-Riitta never married again, but she is having a loving relationship with a fuchsia garden fence. 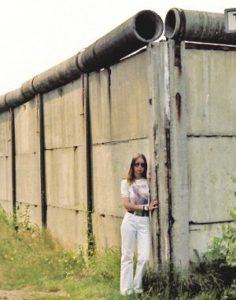