I’m sure that most of you have started, or continue to start your day with a nice bowl of cereal, right? Forget all about the debate on what comes first, the milk or the cereal, I have a juicy story for you all! Put the spoons down first, ok?

John Harvey Kellogg was born in Michigan in 1852. He became a rather successful doctor of his time, and was the chief medical officer of the Battle Creek Sanitarium. His holistic practice was based mostly on vegetarianism, and on his religious beliefs, which were the ones of the Seventh-Day Advent Church. So, let me clarify how those two come together.

Kellogg believed that most health problems could be cured by changing the intestinal flora, and that means enemas! His patients had to go through special water enema machines, followed by yogurt enemas – half the yogurt was used in the enema, the other half could be eaten, hopefully with no mishaps…

Now, the way this story started, one could argue that Kellogg was a hipster-doctor, away ahead of his time. Yeah, but the reason why he promoted vegetarianism was the idea that rich flavors give us sexual urges – and help with the enemas of course. So, a dull food a day, keeps the hands away!
Speaking of which, he was leading the anti-masturbation movement, and he had several ideas on the “rehabilitation” of masturbators, which sadly included mutilation for both sexes. He’s also responsible for the expanded practice of circumcision in the U.S, but that’s a different topic.

He eventually came up with a better idea than mutilation regarding the masturbators of this planet. Cereal! His original Corn Flakes were designed by him to kill all sexual urges, thoughts, desires, and feelings.
Go ahead, make yourselves another bowl. I’m sure the recipe has changed dramatically over the past years, or it was never effective to begin with! 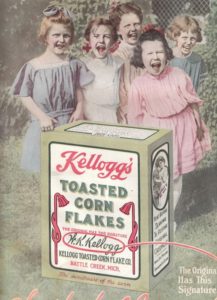