I think I’ve told you enough folklore stories in the past month. Maybe it’s time to leave this charming fantasy world, and go back to the brutal reality of true crime. Today’s story is well known to any living Greek, but you, my sweet, English speaking readers, are clueless, and I’m about to change that!

Back in 1972, in the suburbs of Athens, a boy was born. He was named Asimakis Katsoulas, but for your ease, let’s just call him Makis. Makis grew up to be a very handsome young man, with a true social charisma, a narcissistic personality, a kinky disposition, and a thirst for power. It wasn’t long before his qualities summoned (pun intended) his first followers. Among all those surrounding him, two teenagers stood out; Manos, a reserved boy who followed him blindly, and Dimitra, his young girlfriend.

Now, imagine you are in your late teens, you are aching for power, money, glory, women, and you have loyal friends who not only crave the same things, but will also do whatever you say. How would you go about achieving your goals? What would Makis do? Well, if you believe in those kinds of things, there’s only one fast lane to power and glory, and that is Satanism. If you are also naive enough to buy this, you know that it might take, hmmm, many sacrifices to reach your objective.

The first sacrifice was a 14 year old girl, named Theodora, and the year was 1992. Theodora belonged to the larger group of friends of Makis, and she was convinced by Dimitra, that she would partake in an innocent, “white magic” ceremony. I will spare you the details of her gruesome death and how her body was treated postmortem, but I will just mention, that as part of the ceremony, and the disposing of her corpse, of course, the group accidentally started a fire that got out of control, and burned down a vast forest area around Athens.

One year later, Satan apparently hadn’t returned that call. Makis probably thought that one blood sacrifice wasn’t enough, and he found his next victim, in the 28 year old Garifallia, a mother of two who was working as a maid. She was on her way home, on foot, late at night, when Makis approached her in his car, claimed to be a police officer and made her take that ride. Again, it was brutal, and I won’t get into details.

It was the relatives of the first girl, who was now missing for over a year, who never stopped looking for an answer. Their persistence led to the arrest of the three Satanists. The Greeks, as a conservative, and religious society, were appalled by the news, and as more horrid details were coming into light, panic and hysteria settled in.

Satan didn’t attend the trial, hell, he didn’t even send a lesser daemon as a representative. Still, they clearly had some evil help, as all three of them, are now released from prison and are living freely among us. Shortly before Makis was released, he was caught harassing two minor girls from the prison telephone line, and during a small break, he attempted to rape a 23 year old girl by pretending to be a police officer… again! 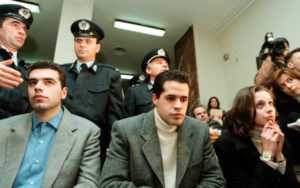