Hello my dear readers, and please excuse the delay, but this writer has been hit hard by Spring! Fear not though; birds may be chirping, trees may be blooming, and the sun may be shining, but the list of weird people and bizarre stories is endless…

I’ve always been fascinated by serial killers. It’s an endless topic, which, although macabre, offers a real insight into the people’s psyche. There are all sorts of killers out there, psychotic, cold-blooded, sociopaths, and so on, and there’s another category that rarely makes the headlines; the medical ones. Introducing Hu Wanlin, and be warned – this text contains human stupidity.

Hu Wanlin was born in 1949 in Mianyang, China. I wasn’t able to find a lot of information about his early years, but I guess those years are not important anyway. I’ll start the story from somewhere in the 80’s when Hu Wanlin was arrested on various accounts, including homicide, trafficking and swindling. Now, serving a sentence in prison can be boring, and Hu Wanlin thought he’d better take advantage of all that free time, and secure his future. It was 1993 when he opened his first medical practice, while incarcerated. Yes, you have understood correctly, and yes, no medical training was ever involved.

Chinese traditional medicine is a gray area. It has sworn followers, parts of it are being practiced even by western doctors, but nothing, I repeat nothing regarding its effectiveness or scientific value has ever been proven. One of the traditional treatments that Hu Wanlin offered his patients, was qigong, a practice that is focused on transmitting energy without any physical contact. Sounds harmless, but also ineffective…

In 1997 Hu Wanlin was released from prison, and he decided to continue with the treatments. In the following years he managed to open two hospitals, where he could practice his * cough* medical profession without any problems. As his “knowledge” expanded, Hu Wanlin discovered what makes people really sick, the real root of all evil… brace yourselves, it’s water! Not a specific water, as from a contaminated river, for example, all water!

So, Hu Wanlin put two and two together, and found the cure for every health problem. Dehydration. He started giving his patients (or maybe I should call them “victims” now) “medicine” that consisted of dangerous, and poisonous salts. Amazingly, he rose to fame, and although the first deaths were reported, he managed to avoid arrest by bribing officials, and by exploiting legal loopholes regarding traditional medicine.

This promising career ended in 1999, when he was finally arrested. With an official body count of 146 deaths, (some say the real number is around 190) Hu Wanlin became the most prolific medical killer of all time.

Although he was imprisoned, some news reports state that he was released in 2014. I did a research and I wasn’t able to verify if he’s roaming free as you read this, or if he’s in prison again. In case he’s free, I’m afraid that the number of the victims will keep on rising, as I see no visible end in human stupidity. 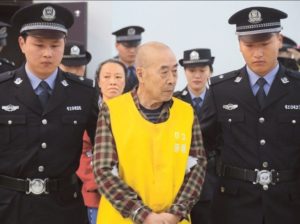