I did some cleaning up in my flat these days. Cleaning up is always a good time for random thoughts, until you pull back a table, or look under the couch, see the huge pile of dust bunnies and think to yourself, “Thank Goodness no one saw that!”. It was at a time like that when I remembered a documentary I had once seen. This is the story of the Collyer brothers, a story of brotherly love, mental disorders, and more dust bunnies that you could ever imagine.

The Collyer brothers, Homer and Langley, were born in New York, in1881 and 1885 respectively. They were the sons of an upper-class family, owning a four-story brownstone in Harlem. Their father was a doctor, and their mother an opera singer. Homer studied law, and Langley engineering. Both of them had an interest in music, but Langley mastered the piano so much, he actually performed in Carnegie Hall.

Everything sounds ideal so far, right? The first blow came when their parents divorced and their father moved to a new house, leaving the brothers with their mother in the huge brownstone. The brothers were already in their mid to late 30’s when this happened, and although both of them were working, and had a social life, they remained single. Their father’s death in 1923 followed by their mother’s death in 1929, left them rich, but in a poor emotional state.

For the next years they would lead what we call a “normal” life, until Homer became gradually blind and Langley decided he would stop working in order to help him. Since none of them trusted doctors, Langley started coming up with his own cure for blindness, which consisted of oranges, peanut butter, and black bread. At the same time, they were feeling very concerned and insecure, as Harlem was transforming and more African Americans were moving around them.

With Homer not being able to go out, and with their fear of burglaries increasing, the brothers decided to take shelter in their home. First, they boarded up their windows and then their phone, gas, and electricity were cut off. Langley used his engineering skills to provide heating. While his uncontrollable hoarding increased, he set up various booby traps and an elaborate system of tunnels through the piles of junk. During the following years, and as the house was filling up more and more, there were wild rumours being spread about them, and the police was often called by the neighbors.

One of those times, in 1947, the police received a tip for a foul smell. Upon arriving at the house, and having to break down the door, they realized that it was impossible to enter without throwing the junk on the street. Making their way inside, and after five hours of digging, they found the body of Homer. He had died of starvation ten hours ago. Langley was nowhere to be found.

As days passed, and Langley didn’t attend his brother’s funeral, the police decided to go back in. After hours of digging, they were able to locate his body. Langley had fallen victim to one of his own booby traps, and was buried under tons of junk. He had died 12 days before Homer.

After their death, the house was considered a hazard and was demolished. The 140 tons of junk that were removed included 14 pianos, the chassis of a car, 25.000 books and an unknown huge number of newspapers. As Langley had once said about those, “I am saving newspapers for Homer, so that when he regains his sight he can catch up on the news.” 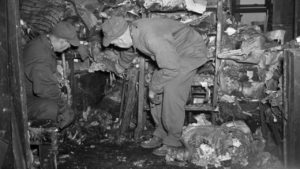