The Cadaver Synod (no, it’s not a Harry Potter spell)

You will need the backstory, which is more complicated than your average soap-opera, but I’ll try to skip the boring details.

It’s 864 and Formosus becomes the bishop of Porto (not to be confused with Porto in Portugal). Apparently he did such a good missionary job in Bulgaria, that Bulgarians asked him to be their bishop, which wasn’t allowed, since he was already appointed elsewhere.

Those were turbulent times and gaining such attention wasn’t always a good idea. The then Pope, John VIII, accused Formosus of aspiring to Papacy and of violating the bishops laws, and as a result he excommunicated him in 876.

In the following years, being a Pope was risky business. There was a quick succession of them, as most of them would be assassinated. Nevertheless, Pope Marinus I re-instated Formosus, and Formosus himself became Pope in 891. He was one of the few of his time to die from natural causes! The year was 896.

One year and two Popes later (I’m telling you, horrible times to be a Pope), Pope Stephen VI decided that Formosus got away with those accusations rather easily and thought it best to settle things once and for all. He did what every sane person of his time would do, and that was exhuming the body and putting it on trial!

The body of Formosus was dressed up with the Pope robes and propped up in a chair. Although a deacon was appointed to speak for it, the corpse didn’t really have much to say. A stubborn corpse he was and that made him be found guilty. They stripped it off the papal robes, cut off the three fingers with which he used to bless people, and buried it in a common grave for foreigners. In the general spirit of the sanity and reasonable thinking of the times, they then exhumed the body again, tied weights to it and threw it in the river.

The corpse was recovered from the banks of the river, and its fate would change according to the rulings of each Pope. It is now buried in the St. Peter’s basilica.

Oh, by the way, here’s that Karma thing again. The people of Rome reacted to this parody of a trial and Stephen VI was put to jail where he was strangled within a few months. 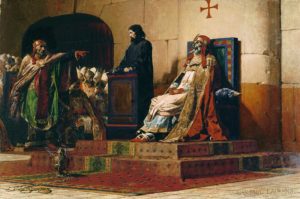