It’s a gray, rainy day today, and I thought I’d tell you all about a real crime case which created a real sensation in Greece back in the days. Hey, it was even turned into a movie!
Firstly, it’s important for you to have some background information, as I’m afraid there are some details you won’t be able to get. Let’s start with the fun stuff, Greek dances!

You have all probably seen the classic Greek dances where many people hold each other and dance around in circles. That’s not all though; there are many more. The one that plays a huge part in today’s story, is called “Zeimbekiko” and it is a very proud, male dance. I don’t know how much sense you can make out of this, but it’s a dance that symbolizes a dignified defeat – it’s a death dance if you may. The steps might look random, and the dancer drunk (well, they are sometimes), but it is all about a man trying to stand tall and keep balance through life’s misfortunes. There’s usually one man on stage dancing this, and the song they dance has usually been ordered to the band beforehand. It is very offensive, I repeat, very offensive, for another man to step up next to the dancer. The designated behavior is to watch and/or clap at the dancer. Good? Let’s move on!

The year is 1973, and Greece is under a military dictatorship. Although this could be a whole article on its own, for now let’s just stick to the fact that during those times, left-wing followers were arrested, tortured, and exiled. Nikos Koemtzis was a petty thief, well-known to the authorities, not only for this, but also for his family’s communist background. For the latter, he was often arrested and tortured. On the night of February 25th, 1973, he was released from prison, and he and his family decided to celebrate by going to a night club.

Things were not going so smooth in the packed club that night. Nikos already had a huge fight with his girlfriend, and there was a large group of off-duty policemen celebrating in the same area. In an attempt to find some release, Nikos asked his brother, Demos, to dance a Zeimbekiko for him. Demos requested a specific song from the band, but they refused to comply. Nikos became aggressive, and the owner of the club, fearing the worst, told the band to play the goddamn song. The stage was emptied, Demos walked in, and he proudly started dancing.

Remember that group of policemen? Well, since Nikos was known to them as scum, they had the bright idea to harass Demos while he was dancing. They walked on stage, and started pushing him around until he fell onto a pile of broken plates. That was the last straw for Nikos, a man who was constantly harassed and prosecuted. Carrying a switchblade, and in full frenzy, he got up on stage and started stabbing the policemen indiscreetly. Total body count, 3 dead, 10 injured…

Nikos was arrested and sentenced to 3 death sentences and 8 life sentences. In 1977, in now free Greece, his sentences were turned to 1 life sentence, and in 1996 he was released. He spent the rest of his days, until his death in 2011, selling his autobiography in the biggest Flea-market of Athens, where even I had the chance to exchange a few words.

There are many lessons to be learned here, especially about pushing people to their limits. On a lighter note, if you ever find yourself in Greece, and a man starts dancing alone, stay put, have some wine, and clap because he’s still standing tall despite all the blows! 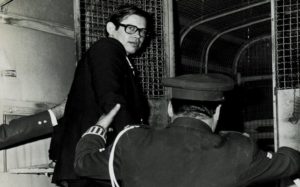