HO HO HO and happy holidays to you all!

I thought I’d give you a story today, a story straight out of Greek Christmas folklore! Put some candy on a plate, and leave it outside, you will need to feed some guests tonight.

Greece is a land filled with tales, whose origins are lost in time. One of these is the story of the -brace yourselves- Kalikantzari. Not that bad, try it slowly and repeat after me Ka – li- kan-tza-ri. These are demonic creatures, which, according to the area of the country you are in, live either in Hades (that’s the underworld people, not a God, perhaps I should write an article on the topic), or in the center of the Earth.

Some say they are born demons, others that they are the souls of evil people. All of them are in some way deformed, and Greeks love to name them according to the deformity. It will get too complicated to give you some name examples, so I’ll pass on that for the moment. What’s important to know, is that those deformities include animal parts, like donkey ears on a human body, goat feet (yeah, it is of course connected with Pan and pagan rituals) and so on.

And what do those creatures do? Nothing much really. They spent all year sawing down the tree of life that holds Earth together, and on the 24th, since Jesus is a baby and can’t harm them, they leave their work, and roam the Earth. They take shelter in people’s homes, where they just make a mess, destroy, and hide things. The only way to keep them calm, is to leave them candy.

So, they roam freely for 12 days, and that is until the Baptism of Christ, on January 6th. That is when Jesus regains his whole power, and our creatures run back to the shelter of the underworld. Sadly for them though, the tree has regenerated during their absence, and they have to start all over again.

Now you know, if something goes missing during those days, put some candy out, ask nicely for its safe return and please don’t make fun of them! Poor things… 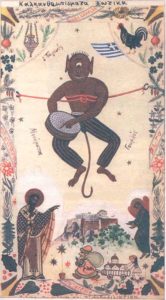