I know, I know, it’s been ages since I last wrote something. Don’t ask! In any case, there’s something about this gray Sunday, and this new lockdown that is starting tomorrow in most of Europe, that made me feel the need to share one story. I might not be writing, but that doesn’t mean I don’t watch my true crime documentaries, or that I don’t research for interesting stories for you all. So, if you are feeling sad about the new lockdown, here’s a story of an absolute lockdown that will make you feel better… just kidding; everything about this story is sad and miserable. Presenting the story of Blanche Monnier!

Blanche was born on March 1st, 1849 in the city of Poitiers, France. Her family was wealthy, aristocratic, and very, very conservative. By the time she reached her 25th birthday, Blanche was still staying in the family home, with her mother and her brother, and by the standards of the era, she was already a spinster, but a spinster of exceptional beauty. Then how, you might ask… Well, her mother was trying to find a groom that would have the same aristocratic background, and a decent social status, while poor Blanche was in love with a “simple” lawyer who was also much older than her. 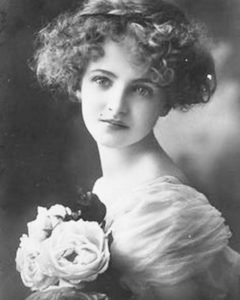 Here’s where things got tricky. I haven’t been able to verify all the information I got, but apparently there were constant fights in the house, as Blanche was adamant to proceed with the marriage. According to some, the wedding date had been planned and announced. The day came and went, and no one saw Blanche getting married, or ever again for that matter. It was around this time that her mother announced that Blanche had unexpectedly died.

Fast forward 25 years later, when the Attorney General received an anonymous, scribbled letter that informed him that someone was locked up in the Monnier family home, for 25 years, and in horrid conditions. We still don’t know who sent the letter, but judging by the poor way it was written, it is assumed that someone from the staff did it.

The police went to the home immediately, and found no resistance. When they reached the attic, they were taken aback from the horrific smell. When they broke down the door, they discovered Blanche. She was completely naked, chained to the rotting bed, covered in feces, bugs, food scraps and I don’t know what else, and weighing only 25 kilos. All the windows were boarded up, and since the smell was intolerable, the police had to remove the boards to get some fresh air in. She was shocked and terrified by the sunlight, as she had been in complete darkness for 25 years. 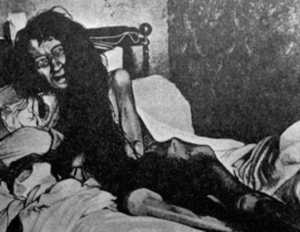 Yeah, this doesn’t have a happy ending, you know that, right?

According to everyone who treated her, Blanche was extremely thankful for the nurses who bathed her. During her isolation -to put it mildly- she had developed several mental illnesses, including schizophrenia, coprophilia, and anorexia nervosa. She spent the rest of her life in a mental institution, and passed away in 1913, without ever seeing her beloved fiance again; he had passed in 1885.

As for her mother and brother, they were both arrested. There are many things that went wrong with the legal procedures. Firstly, there was a lack of appropriate laws for cases like this. Secondly, families like this, belonging to “higher” social levels, were a bit invincible. In any case, the neighbors were really upset, and angry mobs started forming in front of the Monnier house. Apparently the mother couldn’t handle the stress of it all, and passed away 15 days after Blanche was discovered.

The brother did go to trial, was sentenced to one year, but managed to get himself acquitted. There’s a lot to be said about him. He was the one person who could have ended this, but decided to play along. The fact that he never got married, and stayed in the family home with his mother – he was 50 when all this happened- tells us a lot about his relationship with his mother. Although I don’t sympathize with him, it’s more than evident that he too was a victim in this abusive, dysfunctional home. He was forced to leave the town and move to the countryside, as the neighbors made sure to let him know he was no longer welcomed back.

Now, the neighbors… this is the thing that no one talks about. Had they been secretly discussing this all these 25 years? Yes! Did they suspect that Blanche was locked up and not dead? Yes! In fact, some of them testified after the discovery, that they could indeed hear her screaming. Could they have sent that letter sooner? Yes! Were they so angry because of their guilt? Probably yes! Is there something to be taught from all this? Oh yes…